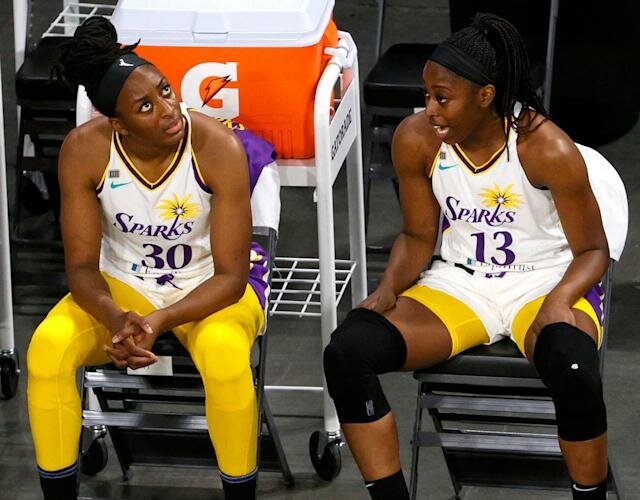 It was a case of different strokes for two siblings, as the Ogwumike sisters, Nneka and Chiney, had varying tales to tell from their club’s latest game in USA’s Women’s National Basketball Association (WNBA).

Megasportsarena.com reports that, while Nneka took part in the game for Los Angeles Sparks and ended with 17 points that helped their side to victory, Chiney sat out the game due to their coach’s rotational strategy.

In Chiney’s absence, The Sparks struggled, stumbled and crumbled Kelsey Mitchell enacted a game-high run of 25 points that helped Indiana Fever rally to a 74-72 victory in Indianapolis.

Teaira McCowan scored the final two of her 15 points on a pair of free throws with 15.3 seconds remaining that completed a 10-0 run to seal the game.

McCowan also matched her career best of 19 rebounds, eight of which came on the offensive end, while shooting 9 of 11 from the free-throw line while taking advantage of a thin Sparks frontcourt.

Nneka had 17 points to lead Los Angeles (10-17), who dropped their fourth straight game, but they direly missed Chiney, who was left out due to a scheduled rest on the fifth game in The Sparks’ six-game road swing.

The Sparks were also without Jasmine Walker due to a knee injury, but Lauren Cox and Nia Coffey provided boosts off the bench, with 14 and 13 points respectively, to join Nneka and Wheeler (10) in double figures.