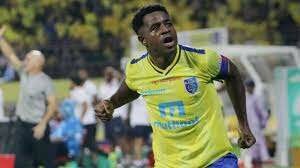 Former Super Eagles’ striker, Bartholomew Ogbeche has sent out a message of appreciation to all fans that voted him and helped him emerge with best goal of the season in India, megasportsarena.com can report.

One of Ogbeche’s total 15 goals of the past campaign in the Indian Super League was voted best by football fans in the Asian country, and the Kerala Blasters forward, who has previously played for Paris-Saint Germaine of France, Middlesbrough of England and Cadiz of Spain, among several other clubs, is showing his appreciation to the electorate.

Such is the glee trailing Ogbech, after his well-struck shot against Chennaiyin in December got the nod as Fans’ Goal of the Season in the Indian top-flight, as the 35-year-old’s equaliser from outside the box got 61.27% of the votes to see off competition from Rafael Crivellaro’s 50-yard strike in the final match-up.

It is another amazing feat for Ogbehe, who last played for Nigeria in a friendly against Republic of Ireland in 2004 and scored a brace in the 3-0 win, before which he had been with the Eagles at the 2002 FIFA World Cup in Korea/Japan, where he made two appearances at the Mundial.

He then embarked a busy club career that has taken him to several counties and, since moving to India from Willem II Tilburg of Holland in 2018, he has scored 27 Super League goals across two seasons, including 12 during his debut campaign with NorthEast United; and he is quick to note the role his fans have played in giving him success in the less-glamorous country.

Ogbeche posted on social media: “You want to talk about the realest fans ? 😊 I’ve got them, and yes, I’m a blessed guy 🙏🏿 ! You all are nothing but true-blues ❤️ ! This is very humbling and I’d like to congratulate @rafeal.crivellaro as well as all the other nominees.

“A big thank you to all who voted for me. Much ❤️ and respect to my coaches and teammates who have put me on this pedestal 🙏🏿. #grateful #Godson #letsgoblasters #💛💛💛 #indiansuperleague.”