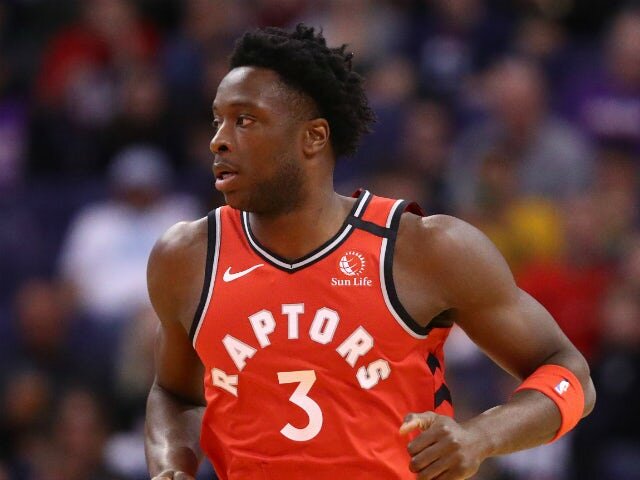 Toronto Raptors of Canada star, OG Anunoby will on Wednesday night seek to reenact another dose of heroics in order to save his side from bowing out of the play-offs in USA’s National Basketball Association (NBA) league, as they go out against Boston Celtics in Orlando, Florida, megasportsarena.com reports.

Anunoby and the defending champions enter the game 3-2 behind Boston, who need a midweek victory to seal a spot in the Eastern Conference semi-finals, but The Raptors can keep their title defence alive with victory in Game 6 on Wednesday night; for which they would again rely heavily on their Nigerian-born youngster, whose late three-pointer last weekend still resonates.

However, in contrast with how he hit a very late treble to fetch a one-point win margin for his side at the onset on their series, Anunoby could not repeat his heroics on Monday, in a game that saw six Celtics’ players net in double figures.

While Anunoby and the title holders struggled for form, Boston were led by Jaylen Brown with 27 points, as The Celtics dominated The Raptors en route to winning 111-89 and take a 3-2 lead in their best-of-seven NBA Eastern Conference semi-final series.

It means The Raptors have everything to play for this Wednesday, after Kemba Walker added 21 points, Jayson Tatum had 18 with 10 rebounds, Brad Wanamaker and Daniel Theis got 15 apiece, while Marcus Smart also netted 12 for The Celtics, who rebounded from two consecutive losses after they had blown a 2-0 lead in the series.

Fred VanVleet had 18 points to lead The Raptors, who never led in the contest and trailed by as many as 30 points, as The Celtics ran away early and the holders endured one of their worst scoring play-off quarters in franchise history.

Boston were up 18-5 after eight-and-a-half minutes, as Toronto began 2-of-14 from the field and The Raptors ended the quarter shooting 4-for-20 and trailed 25-11, hitting only one of nine shots from three-point range.

Boston’s advantage reached 46-25 on a Tatum three-pointer with 4:55 to go in the second, after which the lead reached 28 points before half-time and Celtics entered the break up 62-35 after Walker beat the buzzer with a floater.

The 27-point half-time deficit tied the largest ever faced by a defending NBA champion during a playoff game, but The Raptors began the third with a 6-0 run, with Pascal Siakam making a trio of short-range buckets, yet The Celtics’ lead never dropped below 20 in the quarter.

At 4:23, Boston’s advantage reached 79-49 on a Brown step-back jumper, The Celtics led 87-63 after three and The Raptors emptied their bench midway through the fourth – but there was not to be any heroics from Anunoby, as his opponents made sure they hooked a crucial a 111-89 win in Game 5 to take a 3-2 series lead heading into Game 6 this Wednesday night in Orlando.

A report by Sports Yahoo added: “The Celtics dominated from the outset and entered halftime with a 62-35 lead. They held the Raptors to 11 points in the first quarter. They scored 37 points in the second, two more than the Raptors tallied in the entire first half.

“Toronto competed in second half, but the first-half damage was too significant. There was no historic comeback in store, and the Celtics now stand a win away from the Eastern Conference finals.

“It speaks to the strength of the Celtics, who can look to a number of weapons to take the offensive lead, even without an injured Gordon Hayward. While their offense was humming on a 49.4 percent shooting night, it was their defense that starred on Monday.

“Anunoby struggled to seven points on 3-of-11 shooting while Pascal Siakam managed just 10 points and four rebounds. Marc Gasol didn’t score and Kyle Lowry totaled 10 points and five assists. It was a rough night all around for the Raptors. The two teams meet again for Game 6 on Wednesday as the defending champion Raptors fight to keep their season alive.”