on: June 24, 2020In: basketball, Other sports, other sports, Sports, tennisNo Comments
Print Email 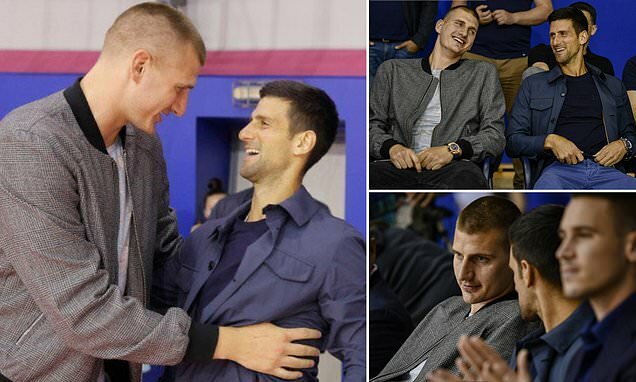 Serbian tennis ace, Novak Djokovic has infected his compatriot and Denver Nuggets of America basketball star, Nikola Jokic with coronavirus, after he also earlier tested positive in his native Serbia, days after they were pictured hugging, megasportsarena.com gathered.

Jokic and Djokovic met in Belgrade on June 11 and were pictured hugging and sitting beside each other with no social distancing at a basketball event, although there is no evidence to suggest that either man gave the virus to the other.

Djokovic has now issued an apology for the conduct of his Adria Tour fiasco, where social distancing was widely ignored, as the tennis ace softened an earlier statement in which he had shown little remorse for what transpired.

Among the images which emerged from the events in Serbia and Croatia were those of him and other players dancing half-naked together in a Belgrade nightclub, and the men’s tennis world number one confirmed that his wife, Jelena, also tested positive and said the pair would remain in self-isolation for the next 14 days and repeat the test in five days.

The Serbian top tennis player and his wife tested positive, after the anti-vaxxer ignored social distancing by partying and playing football and basketball on his disastrous Adria Tour, which has now been trailed with reports that several of the participants are down with COVYD-19..

Djokovic retorted; “I am so deeply sorry our tournament has caused harm,’ said Djokovic, who does not have symptoms. ‘Everything the organisers and I did the past month, we did with a pure heart and sincere intentions.

“We believed that the tournament met all health protocols and the health of our region seemed in good condition to finally unite people for philanthropic reasons. We were wrong and it was too soon. I can’t express how sorry I am for this and every case of infection.

“If you attended Adria Tour or were around any attendees please get tested and practise social distancing. For those in Belgrade and Zadar, we will be sharing health resources in the immediate future.”