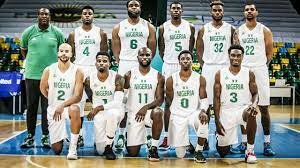 The spokesman of Nigeria Basketball Federation (NBBF), Afolabi Oni has come out with an explanation of the absence of players from USA’s National Basketball Association (NBA) league in the latest squad for D’Tigers, megasportsarena.com reports.

Oni stated that D’Tigers will be at the continental competition in Kigali, Rwanda with only home-based lads, simply because NBA’s rules do not permit players participating in any other event or competition 60 days before the season begins in USA’s prestigious basketball league.

The media officer, however, expressed confidence in the squad that will be lined out by D’Tigers’ coach, Mike Brown, who during the week released his final roster of 12 players for the 2021 FIBA Afrobasket which begins next week.

He further disclosed that D’Tigers will land in Kigali on Sunday ahead of their first game against Mali on Wednesday after which the Nigerian team, which is ranked number one in Africa, will face Kenya and Côte d’Ivoire in Group C.

The propel the NBBF’s hope of seeing the squad improve on the silver medal won at the last edition of 2017 in Tunisia, the federation has drafted in Coach Ogoh Odaudu, who led Rivers Hoopers to the inaugural edition of the Basketball Africa League (BAL), as one of the assistant coaches.

While enthusing that the squad would reflect what they gained from days of preparations in the US, Oni disclosed that D’Tigers’ squad to Kigali includes Daniel Utomi, who plays Vichy Clermont in France, and Stephen Domingo from Lakeland Magic in USA’s G-League.

“This has made the coach to try other players by extending his invitation to players in Europe, the minor leagues in the U.S and the Nigerian league.

“The list also has Emmanuel Omogbo of Apoel BC of Cyprus, and Benjamin Emegolu (Rouen Basket Metrople, France), as well as TK Edogi who is making a return to the team after missing out of the 2020 Olympics in Tokyo.

“The duo of Nwafor Celestine Joseph (Kano Pillars) and Agu Ibe Aguchi (Gombe Bulls) are also on the list of invited players from the Nigerian league.”

“We also have on the list Stephen Domingo (Lakeland Magic in the USA’s G-League), Jordan Ogundiran and Jeremiah Mordi,” Oni concluded.