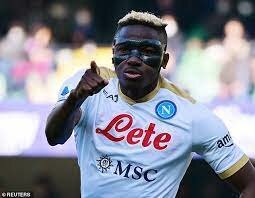 Osimhen’s penalty goal in their last preseason match against Real Mallorca on Sunday, coupled with his display last season may have prompted the decision of the technical crew of the club.

Napoli tweeted after the 1-1 draw against Mallorca: “Osimhen!!! 1-0. But the most important thing: He’s gonna be our penalty kicker this season.”

He was ranked joint eighth in the Serie A, scoring charts with a total of 14 goals and two assists.