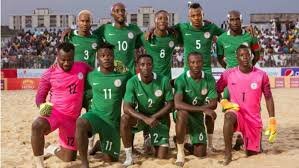 Nigeria’s Supersand Eagles are set to return to international competition with the Confederation of African Football having confirmed that they will battle Libya in a two-leg playoff for a spot at this year’s Beach Soccer Africa Cup of Nations to be hosted by Mozambique.

The Eagles are two-time African champions, having won then African Beach Soccer Championship in 2007 and 2009, and were runners-up in 2010. The team also reached the quarter finals of the FIFA Beach Soccer World Cup in Italy in 2011, losing to Brazil after extra time.

All seven winners of the two-leg playoffs will join hosts Mozambique at the finals, with the two finalists to represent Africa at next year’s FIFA Beach Soccer World Cup finals in the United Arab Emirates.