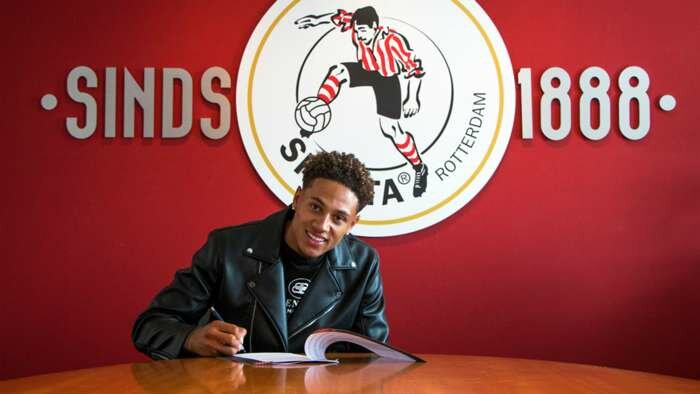 New signing at Sparta Rotterdam of Holland, Emil Maduka Okoye has received a lofty marc of acceptance from the Dutch Eredivisie club’s coach, Henk van Stee, who described the former Fortuna Düsseldorf of Germany shot-stopper as ‘a great talent’ that will strengthen his team, megasportsarena.com reports.

Van Stee was reeling out superlatives for Maduka once confirmation emerged that the Super Eagles’ rookie shot-stopper had joined Rotterdam on a free transfer from Düsseldorf, where he had been stuck in their reserves’ squad that competes in the fourth-tier of German football.

Many critics have echoed strong opinion that Maduka lacked the quality of a national team player because he could not get into the first team at Dusseldorf and was competing yn the fourth division, but he is now bound to hold some bragging rights once international football resumes after the ongoing postponements caused by coronavirus.

Incidentally, the deal that saw Maduka sign for two seasons with an option of a further two, sees the 20-year-old Germany-born keeper, who debuted at full senior level in an international friendly against Brazil last October, means he has joined a club with a strong Nigerian tradition.

That is so, because Ahmed Musa, Sani Keita and Dele Adeleye all played for Sparta Rotterdam in the past, and Maduka will now hope to go one better than his compatriots that featured for the club years ago before him.

This comes after he signed the dotted lines on Monday, after landing in the city of Rotterdam in company of his agent to finalize the other details of the contract that was handed to him a day before, then had his medicals and was later presented to the media, following which the club made plans to hand him an apartment for his accommodation within 24 hours.

In the wake of the signed, sealed and delivered contract that is bound to finally shoot Maduka into the realm of Nigerian goalkeepers starring for top clubs in Europe, the Sparta gaffer confessed that he is happy to have in his fold a highly promising lad, whose physical attributes and grip have been cited as his main assets.

Henk van Stee declared: “With Maduka, we bring in a great talent, who has a lot of potential. He was in the interest of several clubs from different countries, but he believes he can take the next step at Sparta. We believe he can be of value to this club and are happy that he signed here.”

While the club’s coach spoke with delight over the ability to hook Okoye, the keeper was equally beaming with glee, as he told omasports: “I am very happy to join this club, Sparta Rotterdam. It’s a good opportunity to take my career to the next level. Now I am ready for the big stage!”

After signing the dotted lines at Merkur Spiel-Arena, Okoye added that Rotterdam’s promises and plans for him prompted his decision to join the Eredivisie side from Dusseldorf and the 20-year-old says he wants to make the best of his two-year contract with The Castle Lords.

Despite the presence of established stoppers like Tim Coremans, Michael Fabrie and Benjamin van Leer, Okoye, who featured in 14 games, conceded 26 goals, and kept a clean sheet twice in action for Dusseldorf last season in the German Regionalliga West, said he will do all it takes to become the club’s first-choice goalkeeper at Sparta Stadion Het Kasteels.

Okoye concluded: “I’m really happy to be here. It’s the right club for me right now and I feel great to be here. I think this is the right place for me towards preparing for the biggest step in the future. I can’t just wait to get started with the guys.

“They told me their plans for me and everything sounded great, so, that’s why I chose here. This is the right place for me and I feel home already. I expect a lot from myself; I have to work hard and fight for the No. 1 spot and also give my best.”