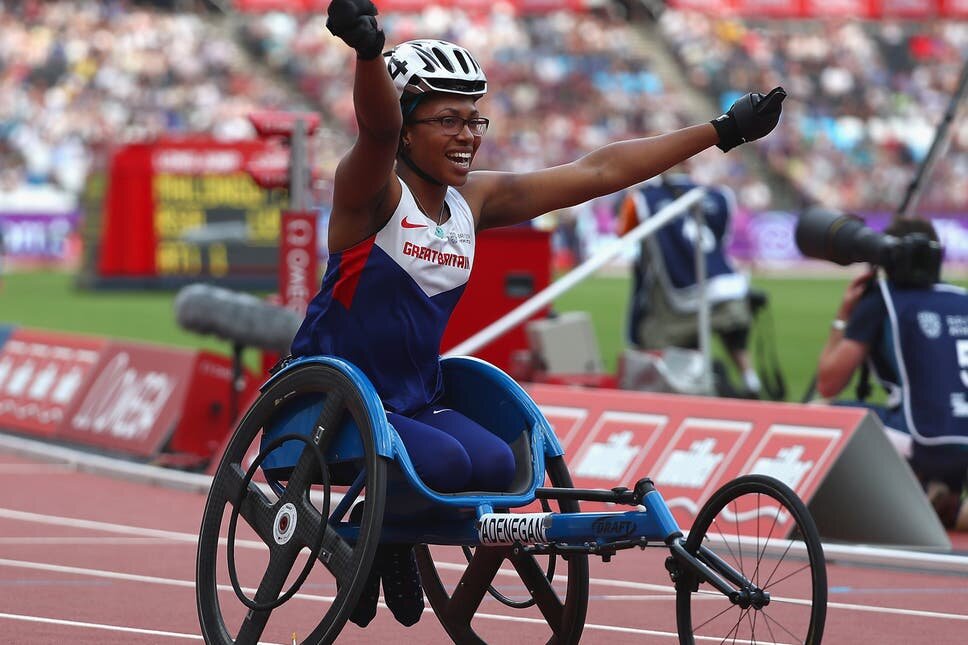 A Nigerian-born special sports athlete, Kare Adenegan shot to limelight on Sunday after winning a silver medal for Great Britain at the ongoing Paralympic Games in Tokyo, Japan, megasportsarena.com reports.

Adenegan settled for silver in the wheelchair race, on a day her compatriot, Hannah Cockroft set a new world record to win her third consecutive T34 100m title and a sixth Paralympics conquest, as Britain won seven gold medals on day five in Tokyo.

The 29-year-old Cockroft bettered her own record with a time of 16.39 seconds to overhaul team-mate Kare Adenegan, who took silver ahead of Australia’s Robyn Lambird.

Cockroft, a 12-time world champion, increased her impressive collection of Paralympic titles in style, following her treble in the 100m, 400m and 800m events at Rio 2016.

Britain’s Paralympics co-captain, who will also contest the 800m in Tokyo, had improved her world records in the 100m, 200m, 400m and 800m earlier this year.

Adenegan, who clocked 17.03, made the faster start in the race, Cockroft overhauled her fellow Briton and went on to hail the silver medalist after beating her to the prestigious gold medal.

Cockroft told Channel 4: “I know Kare is a strong starter. She’s always good off the gun so I knew I had to let her go and take my time.

“This last 18 months has been so weird and so, so hard. I just wish the stadium had been full to witness that.

“It’s so special. It just feels like a massive, massive relief. We didn’t know if we’d be here in Tokyo. I was so nervous. I did everything I could and thankfully it was enough.”

On her part, the 20-year-old Adenegan, who was Britain’s youngest competitor at the 2016 Paralympic Games in Rio de Janeiro, Brazil, revealed that she was inspired to start racing by seeing others in action on home soil at London 2012.

After being inspired by the Games she found an athletics club five minutes from her home in Coventry, where her talent was quickly discovered. In 2013, she came second in the Mini London Marathon and became the British under-15 champion in the 100m, 200m, 400m and 1500m.

In a 400m Grand Prix final in London last September Adenegan pulled off the win of her career, becoming the first athlete to beat world record holder Cockroft in over seven years, before which she won double bronze at the IPC Athletics World Championships when she was just 14.

The exuberant wheelchair racer, who has cerebral palsy, admitted she was exciting competing at Rio 2016 against athletes she watched on television during the London Games and extended her delight into winning silver in her second outing at the Paralympics.

Born 29 December 2000 in Coventry, England, Adenegan attended Bablake School and is now at Warwick University, where she specialises in sprint distances in the T34 classification.

She was classified as a disability athlete in 2013, but found found herself excluded from sports due to her cerebral palsy, but the 2012 Games made her realize that sport was open to her.

That year she joined a wheelchair academy in Coventry, and after becoming classified as a T34 athlete she began competing at national meets in 2013.

Competing for Great Britain at the 2016 Summer Paralympics, at the age of 15, she won a silver medal and two bronze medals.

In 2018, Adenegan set a new world record in the T34 100m at the Müller Anniversary Games in London, with a time of 16.80 seconds. Adenegan is the only T34 athletes to have completed the 100 metres in sub 17 seconds

Adenegan is also the only athlete to have defeated Hannah Cockroft in a T34 Women’s wheelchair race. (Once in 2015 aged 14yrs and twice in 2018 aged 17 yrs old).

The exuberant athlete, who won the 2018 BBC Young Sports Personality of the Year award, created a major stir in September 2015, at the Grand Prix final in London, when she became the first athlete to beat Cockroft in more than seven years.

The two team-mates met again a month later when Adenegan as selected as the youngest member of the Great Britain team at the 2015 IPC Athletics World Championships in Doha.

There she entered three events, the 100 metres, 400 metres and 800 metres, all in the T34 classification, but missed out on the 100m podium, after finishing fourth.

Adenegan then won her first major international medals of her career with bronze positions in both the 400m and 800m events, which were both won by Cockroft.

In August 2018, at the Para World European Athletics Championships in Berlin, Adenegan defeated Cockroft in the T34 100 metres for the second time in the season, also setting a championship record of 17:34 seconds.

Adenegan then got her first gold medal in senior competition and silver in the 800 metres in the same competition.

In June 2021 she was among the first dozen athletes chosen to represent Great Britain at the Paralympics in Tokyo, where she justified her inclusion by winning a silver medal on Saturday.

“It was tough. It wasn’t for all my primary school life, but around Year 3 and Year 4 it was quite tough to be included in sport, people thought I would get hurt. I don’t really blame anyone for that.

“I just feel that more education needs to be done for teachers to know how to include pupils with disabilities in sport. I lost some self-esteem through that and feel teachers need to be more aware.

“I just really want to enjoy it, as long as I do my very best I’ll be very happy. Age shouldn’t be a barrier. I don’t really think about my age, I just think I’m going to get in the best position possible.

“I just want to show young people that if you have a dream you should just go for it and not think too much about who is in your way.”