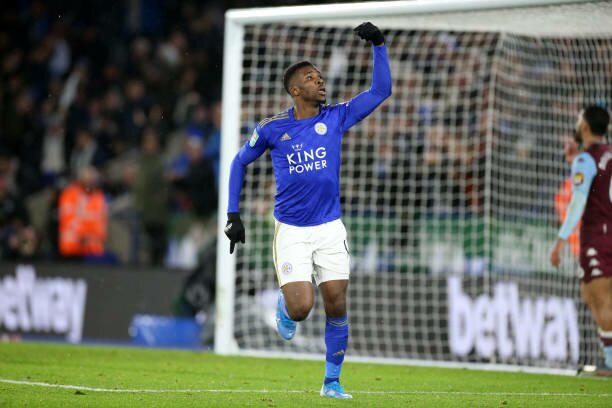 LEICESTER, ENGLAND - JANUARY 08: Kelechi Iheanacho of Leicester City celebrates after scoring to make it 1-1 during the Carabao Cup Semi Final match between Leicester City and Aston Villa at The King Power Stadium on January 8, 2020 in Leicester, England. (Photo by Plumb Images/Leicester City FC via Getty Images)

Leicester City of England attacker, Kelechi Iheanacho says he has turned his focus fully on this weekend’s English Premier League fixture against Southampton, and will not allow the euphoria of his heroic goal against Aston Villa on Wednesday distract him, megasportsarena.com reports.

Although Iheanacho admitted he was truly delighted to save Leicester’s blushes with his last-gasp equalizer against Villa in the first leg of their Carabao League Cup semi-finals fixture at King Poweer Stadium, the back-to-form Super Eagles’ youngster pointed out that the entire squad cannot afford to dwell on that feat, as they have The Saints to confront on Saturday.

Indeed, Southampton will head into the away fixture with memories of how they lost the first game in a record 9-0 slump at home, such that the essence of revenge would be high in the air, and Iheanacho conceded that his side must be on their toes for all 90 minutes.

Nonetheless, Wednesday’s goal was another huge revival for Iheanacho, who has now scored six goals in eight games this term and, after getting off the bench to rescue The Foxes against the same side they beat 4-1 away in the English Premier League last month, he and his pals will be looking to wrap things up be reaching the final with victory away in Villa Park on January 28.

However, with their midweek 1-1 draw first leg behind them and the EPL looming this weekend, Iheanacho, who cancelled out Frederic Guilbert’s first-half opener and was pleased to maintain his form, says the only focus for now is how to make it a double over Southampton.

Iheanacho told LCFCTV: “It’s another goal, I’m really happy. I got the chance and I took it. As a striker you need to be focused and composed in front of goal and the chance came and we took it. The squad did really well in the second half and the pressing we did led to the goal. So, we’re happy.

“I think it wasn’t a bad result, we got the draw. We should’ve done better but in the second half we were a bit better. Now, we need to focus on the next games. It’s two legs now. Of course, we have a Premier League game next. I think we’ll concentrate on that then we’ll get to Villa Park and see what happens.”