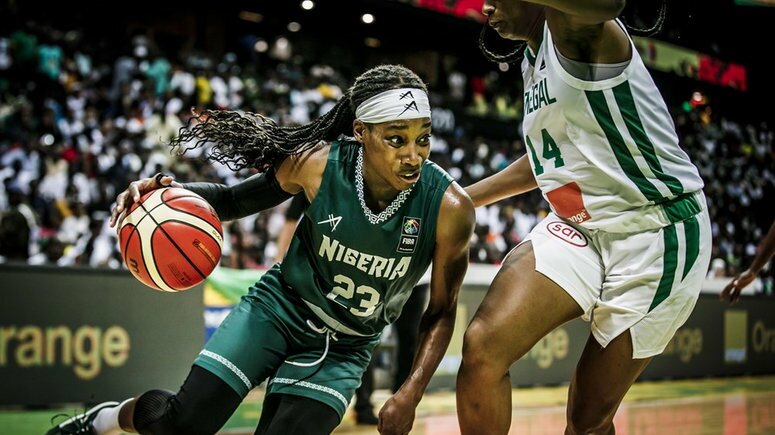 One of the star players in Nigeria’s female basketball team, D’Tigress, Ezinne Kalu has declared that she and her colleagues will put in their best to shock highly rated opponents during next month’s Tokyo 2020 Olympic Games qualifying tournament in Belgrade, Serbia, megasportsarena.com gathered.

Although D’Tigress have been grouped to play United States of America and the host country, Serbia in the first round, Kalu is undaunted, as the France-based point guard insist she and her colleagues are determined to take their game to the next level and pull off many surprises.

Kalu, who emerged as most valuable player at the 2019 FIBA Africa Women’s Senior Basketball Championship, added that she believes all players in the team will get their act together before the qualification competition starts, as Nigeria Basketball Federation(NBBF) has concluded plans for D’Tigress to open their build-up camp in Belgrade on Saturday, February 1.

That means the players will have enough time together to blend and get new ideas from their coach, Otis Hughley five days before they start their campaign against Serbia, before playing current world champions, USA and fellow-African side, Mozambique.

All four countries will be gunning for only two Tokyo 2020 tickets on offer, but Kalu is thinking of more wave making heroics from D’Tigress, who will also feature Italy-based Ifunanya Ibekwe, Promise Amukamara (France), Sarah Imovbioh (Belgium) and Spain based Elo Edeferioka, while another point guard, Sarah Ogoke has been recalled to replace Upe Atosu.

A strong hint has also emerged that Elizabeth Balogun from Louisville University in USA may be handed her first national team call, alongside 2019 Zenith Bank Women Basketball League’s most valuable player, Musa Murjanantu.

Pallas Kunaiyi Akpannah will also join Evelyn Akhator, Aisha Balarabe, who just moved to Spain, and team captain, Adaora Elonu, as they prepare for the Olympic campaign, with D’Tigress out to pick up lost ground, having missed out of the 2016 Games in Rio, Brazil.

Ahead of camping at the start of next month, D’Tigress’ will be beefed up with Air Warriors of Abuja coach, Samson Sotuminu and Aderemi Adewunmi from MFM of Lagos, as they will both join the technical crew before heading to Belgrade, on the backdrop of their heroics last season in the Zenith Bank Women’s Basketball League.

Sotuminu guided league debutants, Air Warriors to the 2019 title, while Adewunmi’s tactical acumen saw MFM snatch a continental ticket after losing gallantly in the final, such that they will be additional brains in calling instructions to the players and Kalu, who plies her trade with Landerneau Bretagne Basket in the French League.

Kalu is thinking big ahead of the competition and told FIBA.com that D’Tigress’ present crop of players have what it takes to daze the Americans and shock the hosts, Serbia, adding: “In order to be the best, you have to beat the best, or even play against the best.

“Games against the USA and Serbia are opportunities for us to show what we can do against top teams. We know we’re the top team in Africa and that’s great but to take our level of focus and game to the next level, we have to play against these great teams and show our talent.”