Iheanacho Listed For Leicester City Goal Of The Month, Battles Six Others 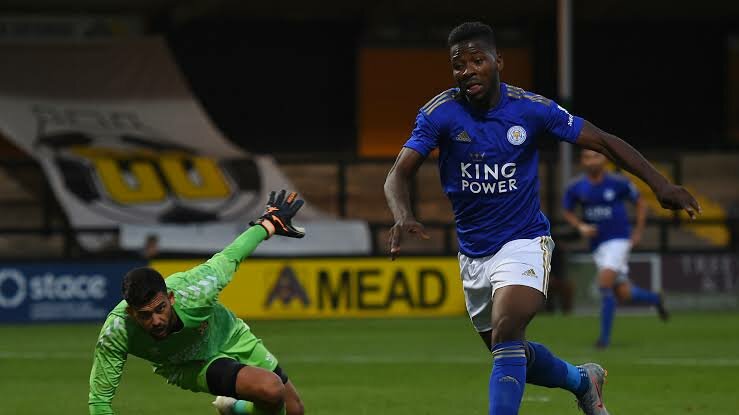 Leicester City of England midfielder, Kelechi Iheanacho has gained another lift to his embattled days at King Power Stadium, as he is among a roll call of seven nominees, among whok is a Nigerian-born lad, for the club’s goal of the month award for October, megasportsarena.com reports.

Although he was again left on The Foxes’ bench for all 90 minutes of last Sunday’s 2-0 win away to Crystal Palace and is yet to regain his lofty status in the squad, Iheanacho has been recognised for only his second goal of the season, which came last week in the Carabao Cup.

Indeed, his only other goal of the campaign was also in the Cup competition, which has apparently now become his favourite hunting ground, and Iheanacho is bound to get due compensation to his battling efforts for a resurgence with a vote in the best goal roll call.

Such it is that the out-of-favour Super Eagles’ youngster has been named alongside a Nigerian-born youth team player in the club, Josh Eppiah, with the club’s fans set to pick their best of the pack from goals scored by seven players, including two from their age-grade ranks.

Iheanacho made it two goals in as many games when he opened scoring in the seventh minute against Burton Albion in the fourth round of the Carabao Cup on October 29, as he struck from an excellent sweeping move by the squad and an assist by Youri Tielemans; while Eppiah hit a 90th minute strike from far out to help Leicester U23s beat Grimsby Town 2-1 in last Tuesday.

However, Iheanacho and Eppiah have to see off competition from James Maddison, Ayoze Pérez (3), Khanya Leshabela, Jamie Vardy and Youri Tielemans to win the Goal of the Month award, for which the club’s supporters have until 11:59pm GMT on Sunday, November 10 to vote.