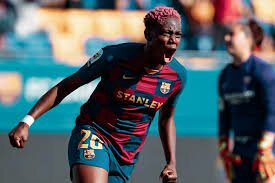 FC Barcelona Femini of Spain striker, Asistat Oshoala is relishing her first ever league title with a revelation that she took inspiration from former national team stars, Mercy Akide-Udoh and Perpetua Nkwocha when she was growing up, megasportsarena.com reports.

The 25-year-old attacker was sensational during the course of the cancelled campaign, scoring 26 goals in all competitions, of which 20 were in the Spanish women’s top-flight league, which she admitted left her truly elated, even as she also congratulated her teammates, the technical, their fans and her well wishers at home in Nigeria.

In the wake of the announcement that Oshoala’s club had been declared champions of Spain, after the season was called off on account of delays caused by coronavirus, ‘Super Zee’ is taking a look back at how it all began for her, and labeled the duo of Nkwocha and Akide-Udoh as her favourites Nigerian players.

Oshoala’s testimony comes few hours after confirmation came that she had won her first European league title, sequel to reports that Barca Femeni had been officially declared as winners of the 2019/20 women’s Liga season.

This comes after Spain’s football federation (RFEF) opted to cancel the ongoing campaign, which had been suspended due to influx of coronavirus, and the decision ensured champions’ status for Oshoala’s side, who were leading the Primera División Femenina table with 59 focuses from 21 matches before the season was stopped in March.

At that point, Oshoala had a personal haul of 26 goals, including a two against UD Tacon in January, which put her at par with the scoring form displayed years back by Akide won the first ever Africa Women Footballer of The Year award in 2001, and Nkwocha, the first player to knick the continental gong four times.

Having equaled Nkwocha’s feat by taking the diadem in 2019 title, following earlier conquests in 2014, 2016 and 2017, Oshoala has now confessed how much she adored the legendary duo that set the stage for great things in Nigerian football across Africa and the world, even as she hopes to continue achieving greater things than the twosome pulled off during their time.

The former FC Robo Queens of Lagos, Rivers Angels of Port Harcourt, Liverpool and Arsenal Ladies of England as well as Dalian Quanjian of China star, who missed a chance of playing alongside Akide but starred for a while with Nkwocha, after getting her senior debut in 2014, said she now aims to keep soaring in order to prove how much she learnt from the legends.

The 26-year-old dashing lass, who shot to limelight as top scorer and most valuable player at the 2014 FIFA U20 Women’s World Cup in Canada, where Nigeria’s Falconets finished as runners-up, and is now captain of the senior team, Super Falcons, said she also wants to add to the three African Women’s Cup of Nations titles she already has from four outings.

Having already played at two editions of the FIFA Women’s World Cup, Canada 2015 and France 2019, Oshoala, who hails from Ikorodu in Lagos State, but grew up in Lagos Island, posited that she wants to keep improving on her game, as she noted that both Akide and Nkwocha played various roles during their time, such that they did more than just scoring goals for their teams.

Oshoala told Nigeria Football Federation (NFF) media: “My favourite players were Mercy Akide and Perpetua Nkwocha. Perpetua was the player that when they come from abroad, I watched her closely when I just joined the Falcons and I admired her a lot.

“She doesn’t know but as a young girl, there are these people you look up to and want to be like. I love Perpetua’s style of play. I followed her closely when I was first called up to the Super Falcons camp and I learned a lot of things from her. For Mercy, I used to watch her games.

“I really modeled my game after them because these are female players that I always watched when I was pretty young. She will be the link between the midfield and attack. She plays more like a No 10. She likes to get the ball and bring it forward.”

The 2015 BBC Women’s Footballer of the Year, who initially joined Barca on loan from Dalian Quanjian, after which she signed a three-year contract keeping her at La Blaugranes until the end of the 2021/22 campaign, also reeled out the team’s statistics, which she says made them justified champs, despite Spanish Football Federation (RFEF) cutting the season short due to the effects of coronavirus pandemic, and handed her table-topping side the title.

Oshoala posted on social media: “21 games played, 19 won, 2 draws , 0 defeat , 86 goals for ,6 goals against. Top of the league since game day 3.I’m just gonna say we have the best team @FCBfemeni , congratulations my queens , ever working technical crew , fans all around the world. WE MADE IT! CHAMPIONS 19/20.”