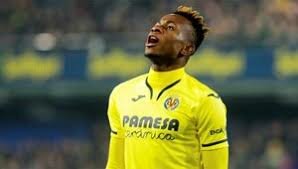 Villarreal of Spain winger, Samuel Chukwueze might be pushed towards either Manchester City or Chelsea in the summer transfer window, following the failure of the duo’s English Premier League rivals, Liverpool to formally follow up a link they had with him in the January market, megasportsarena.com reports.

Although The Red appeared to get the green light from Chukwueze and his agents, theey failed to reach an agreement with his club’s top brass over a possible deal in January, which has now left him open for rival bids from Chelsea and City in the summer.

A report by Daily Mail disclosed that, where Liverpool were hesitant is making a formal move for Chukwueze, Man City and Chelsea look more committed to wrapping up a deal for the left-footed youngster in the coming window, as they are considering a summer pact with Villarreal.

Liverpool were linked with a £30m bid for Chukwueze in January but, while their interest is long-standing, no formal offer was made for the 20-year-old highly promising talent, who Villarreal value at around £60m, which appeared to scare off The Reds’ buffs.

An additional report by France Football affirmed that The Reds offered €35m to sign Chukwueze, but Villarreal turned their bid down, as The Yellow Submarine stressed that the offer was far from their €100m valuation of the youngster, who has played more than 60 official matches for them, since breaking into their first team mainframe only last season.

Though Chukwueze has found game time and goals hard to get so far this term, France Football also revealed that the dazzling Super Eagles’ lad, who was Lionel Messi’s third choice in his vote for the Kopa Trophy award for best player under the age of 21, is still in hot demand.

While Chukwueze fell short in the final vote for the youngsters’ gong, which was eventually won by Juventus of Italy defender, Matthijs de Ligt, as the Villarreal youngster finished ninth, he is yet in hot demand and could be the centre of a massive transfer tussle among three of England’s top traditional teams this summer.