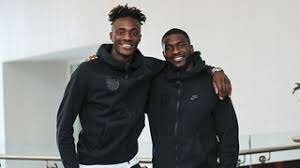 AC Milan of Italy defender, Fikayo Tomori is taking credit for the move by his former Chelsea of England pal, Tammy Abraham to AS Roma, with which he has started raining goals in the Italian Serie A.

Megasportsarena.com reports that Abraham lost his starting spot in Chelsea’s squad following the arrival of Thomas Tuchel as The Blues’ gaffer, in place of his favourite gaffer and mentor, Frank Lampard.

The tall striker, who previously played on loan at Bristol City, Swansea City and Aston Villa, got his much-desired breakthrough at Stamford Bridge playing under Lampard, but a string of bad results soon accounted for the Chelsea legend’s exit.

The replacement of Lampard by Tuchel soon accounted for Abraham’s exit, and a silver lining soon appeared on the horizon for him in Italy, where his Blues’ colleague and fellow-Nigerian-born youngster, Tomori initially played on loan.

Having settled down into a third season with Milan, Tomori reckoned that the Serie A was an ideal place to ply his trade outside England and he freely encouraged Abraham to join him in The Land of The Azzurri by signing for Roma.

Abraham followed in Tomori’s footsteps by agreeing to an offer from Chelsea coach, Jose Mourinho to join him at Roma this summer in a £34m deal at Roma, much to the delight of his long-term pal, who was born in Canada but naturalized to star for England.

Tomori has now disclosed the undercurrents in that move, as he told Daily Mail: “When he first got to know about Roma he asked me about life in Italy and what I thought about the league.

“I said, ‘I was here for six months and I signed permanently, that should tell you a lot.’ We spoke a lot and we’re still speaking.

“He’s enjoying it, and he’s started really well. Tammy is a goalscorer, he will score goals, hopefully not against Milan.”