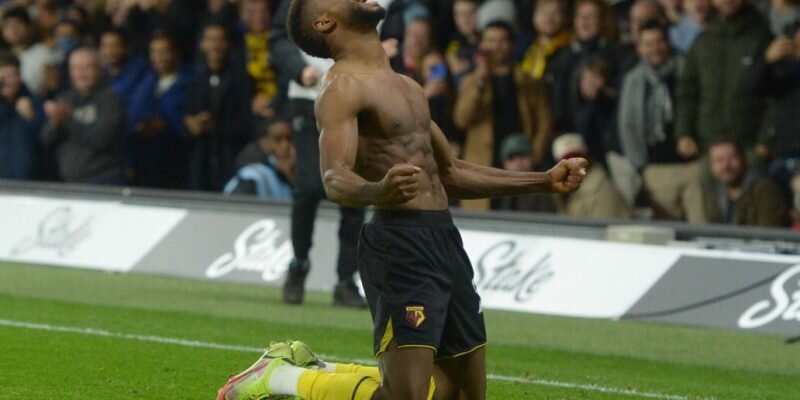 Emmanuel Dennis has heaped praises on Watford’s hard work in front of goal, following their rampant 4-1 win over Manchester United at Vicarage Road.

Dennis, who was the chief tormentor of the Hornets, got a goal and two assists on an unforgettable afternoon, and was delighted with a ‘deserved’ victory and three vital points.

Joshua King fired Watford ahead with his first home goal for the club, with Ismaïla Sarr doubling the lead before half-time. Donny van de Beek’s headed effort halved United’s deficit, but strikes late on from João Pedro and Dennis sealed the victory.

The Nigerian played in the centre of attack with King on the left flank, a change from the games so far this season.

“I can play anywhere in the front three, it’s okay to me and I did the job,” said a jubilant Dennis.

“I’m very happy, we deserved to win. Winning was the only thing in our heads, we kept going and got a very important three points.

“We kept going, I missed the chance before the penalty, I could have scored but we kept going and I got a goal!”

Two late goals calmed the nerves of Watford supporters in the second half, and Dennis was pleased to see João Pedro score his first Premier League goal.

He also talked through the build-up to Watford’s fourth goal of the game, and his fourth strike of the season.

“I’m really happy for him,” said the forward. “He was emotional, which is normal, this is the Premier League. I’m happy I could give him the assist.

“I was running and I thought Cucho [Hernández] was going to chest it to me but he took it for himself. The defender was on Cucho so I took the ball, I knew he was going to stay with Cucho, and then the good finish.

“It [the win] was really important with the big games coming up, we’re really happy.”