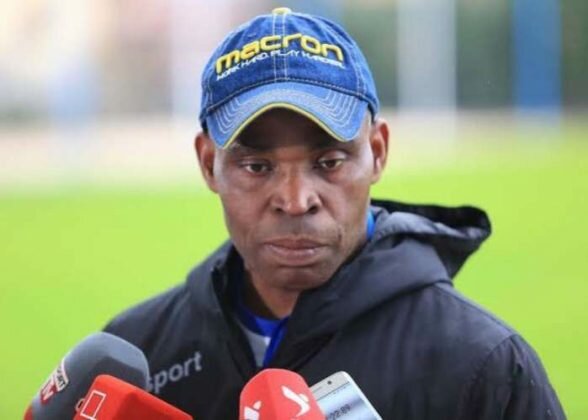 FK Tirana of Albania head coach, Emmanuel Ndubuisi Egbo has spoken at length on various implications he believes his conquest of the East European country’s league title will have on him and other African tacticians, as he admits the impact of the feat will have multiple ripple effects, megasportsarena.com reports.

While stressing that he remains humble in glory and will always continue to recognize the role played by God in making his historic feat possible, the former NITEL FC of Enugu as well as ex-NEPA FC and Julius Berger FC of Lagos goalkeeper acknowledged that his achievement will open doors of opportunities for him and other Nigerian coaches.

He stopped short of putting himself in the picture of an invitation by Nigeria Football Federation (NFF) for him to handle the Super Eagles in the near future, but said during an interview with Mega Sports’ CEO, Bimbo Adeola on Star 101.5 FM, Lagos that he is staying loyal with the club that he also won the title with 11 years ago as their number one shot-stopper.

Indeed, Egbo made history on Sunday, when Tirana, who also used to pay the wages of the Nigerian duo of Abraham Alechenu and Nnamdi Oduamadi, were confirmed champions of Albania after second placed Kukesi lost 1-0 at struggling Vllaznia.

The result means Tirana’s 69 points sees them seven ahead of Kukesi with two games left to play and Egbo’s team cannot be caught, making it his club’s 25th league title in their history and first since they last won it in 2009.

Incidentally, Tirana, who are celebrating their 100th anniversary this month, can also claim a domestic double on August 2, when they face Teuta Durres in the FA Cup final, ahead of which their fans are already in celebration following the decade-long wait for the domestic title.

Ndubuisi, who retired from football in 2011 and went into coaching, becoming the goalkeepers’ handler of another Albanian team, Bylis before he rejoined Tirana in 2014 in the same role, was promoted as the head coach of his beloved club in 2019 and he has remarkably led them to a league triumph in his first season in charge.

Born 25 July 1973, Egbo, who also played for El-Masry of Egypt and Moroka Swallows of South Africa, won three trophies during his playing days with Tirana, where he got his first feel of coaching duties on 17 October 2015, after the sacking of Shkëlqim Muça following a home draw against Flamurtari Vlorë, sequel to which he and another assistant were appointed temporary managers.

Egbo has now led Tirana to next season’s UEFA Champions League qualification stage and the 46-year-old keeper-turned-gaffer could make it a double by winning the Albanian Cup final; with more expectations of glory for the most successful team in the East European country, as they have previously reached the last 16 of European competitions four times.

The 2000 Africa Cup of Nations silver medalist and bronze winner at the 2002 edition is now the first ever Nigerian – nay African – coach to lead a European team to a league title and the hero of the moment admitted how happy he is with the amazing achievement he has been able to pull off in his first major head coaching job.

The deeply religious star, who had 12 appearances for the Super Eagles between 1999 and 2002 when he was a goalkeeper with the same club that he has now led to glory, went on to dedicate the feat to their fans, his family members and his agent, who he described as a wonderful manager of people.

Egbo posited: “I am very grateful to God for making this possible. It is something the club have been waiting to get for several years. It was 11 years ago that I also won the league title with them as a player and to do it for them now as their coach makes me very happy.

“They are also very happy; because it is the first time they are winning the league with a foreign coach – as all their other titles were with local managers. In fact, no foreign coach has won the league with any other club in the country. That also makes me proud, especially as it was not looking good for the team when I took over.

“At that point we were 15 points behind, but we then went on an unbeaten run for 20 matches out of the total of 23 that we played. At a point, we even won 17 matches consecutively; and that made everyone at the club very happy.

“I am not using this to make a statement for myself, but it is something for all African coaches, especially from Nigeria. It tells us that we can be recognized abroad if we work hard, and once we have God on our side. In fact, the ultimate glory has to go to God.

“I will not say this means I am ripe for the Super Eagles’ job, but if I am called I will be ready to come because I cannot turn down my country. It would be an honour to coach Nigeria, having played for the team and won medals with them, but I am not thinking of leaving Tirana for now.

“I dedicate it to all Tirana fans, to my family here and the whole of my family in Nigeria; most especially to my manager, he is a wonderful man; he has been very wonderful for me. If every player or coach has this type of a manager many of them will be happy like me. I am grateful to God for making it possible and I pray he will continue to be with me and the team.”