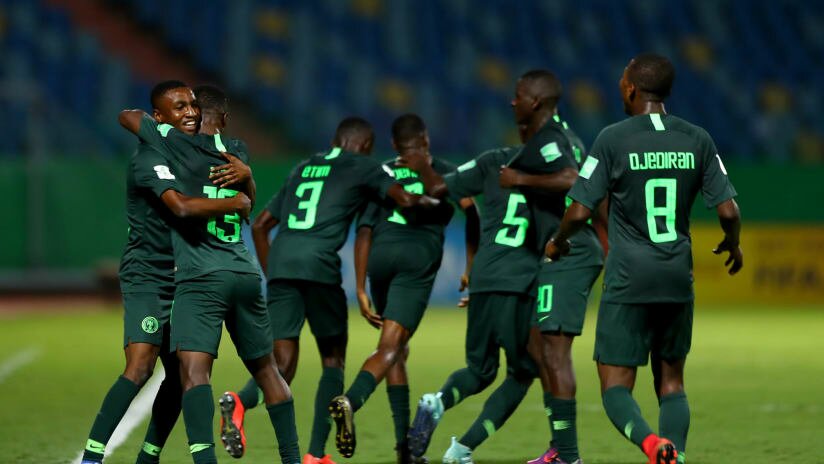 Players in Nigeria’s cadet national team, Golden Eaglets have the privilege of playing themselves into the possibility of deals with FC Barcelona of Spain, as top scouts from the Spanish champions are in attendance at this year’s FIFA U-17 World Cup, alongside egg heads from other clubs across Europe, who are looking out for outstanding talents at the ongoing championship in Brazil.

Megasportsarena.com gathered that the Nigerian lads are in hot demand, after they set tongues wagging on Saturday by twice coming from behind to beat Hungary 4-2 in their opening match to Group B, such that Coach Manu Garba’s boys are now being touted tops of the lot most likely to attract scouts from Barca, Club Brugge, AC Milan and others that are said to be on ground in The Samba Nation.

The report adds that Barca sent their scouts to Brazil to spot outstanding talents and determine potential transfer values from Nigeria, Senegal, Angola and Cameroon, with Eaglets’ captain, Samson Tijani, who shot into the spotlight with two goals and a man of the match award against Hungary.

Also high on the cards of potential revelations from Brazil 2019 are Eaglets’ striker, Olakunle Olusegun, who is said to be on the radar of Barca’s La Liga rivals, Atlético Madrid, while scouts from other European clubs also watched Garba’s boys tear Hungary apart at Estádio Olímpico in Goiânia, Brazil on Saturday night.

Expert eyes that watched the match among the 944 spectators were scouts from Milan, Brugge and FC Porto of Portugal, who were said to have been thrilled with the second half super-sub performance from Sidos Football Academy of Ibadan starlet, Akinkunmi Amoo (aka Little Messi).

Amoo changed the game when he went on for the Eaglets in the 58th minute, breathing life into the Nigerian attack, as he made the best of Garba’s decision to start the attacking midfielder on the bench, alongside equally formidable attacker, Ibraheem Jabaar.

There was no disappointment from the former Shooting Stars of Ibadan trialist, as Amoo, who has also been linked with clubs in Italy, England, France and Holland, showed that he has the right credentials to impress in Brazil.