Chukwueze: I’m Loyal To Villarreal, Not Thinking Of Moving To Chelsea 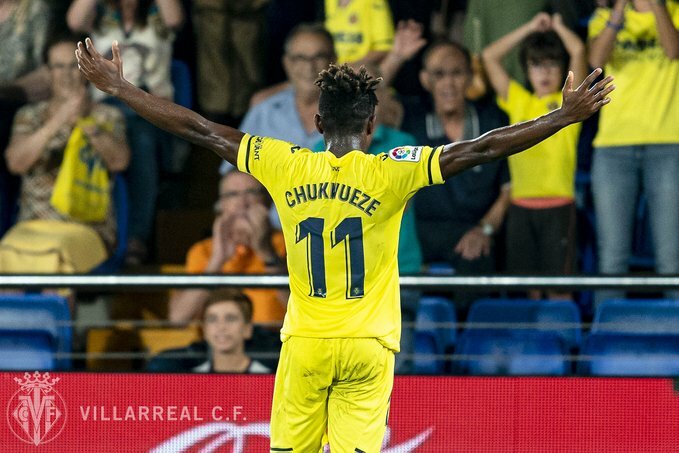 Villarreal of Spain winger, Samuel Chukwueze has sensationally declared that he is not in any way harbouring any thought about moving to Chelsea of England, and stressed that he remains loyal to his current club for the remaining duration of his contract, megasportsarena.com reports.

In contrast with reports at the weekend linking him with a possible move to Chelsea in January, Chukwueze stressed that he only supported The Blues as a kid because of the presence of former Super Eagles’ captain, John Mikel Obi in their team back then.

He pointed that he always made it a habit to support clubs that had Nigerian players in their squads, hence the devotion he had for Chelsea back in the days, but insisted he is not thinking of making a switch to Stamford Bridge and affirmed his loyalty to Villarreal.

While admitting that his excellent form with The Yellow Submarine in La Liga is bound to attract interest from top clubs across Europe, the lad with three goals and an assist to his name from 14 Spanish top-flight league appearances so far this season, stressed that he remains committed to helping Villarreal recover from their ongoing woes in the campaign.

Despite having lost his spot in the Villarreal starting line-up of recent, even getting to play as a substitute last weekend, Chukwueze said he will remain loyal to the team that groomed him and gave him his breakthrough, hence his verdict that he is not going to Chelsea.

Chukwueze told Soccernet.ng: “I was supporting Chelsea. I used to support every team that featured a Nigerian. So my love for Chelsea then was because of Mikel. I am not going because I am a Villarreal player and need to get my confidence more.

“For now, I am a Villarreal player. I am not interested in any other club, I want to concentrate and see how we can remain up there among the best in Spain. I need maximum concentration. I don’t want to be distracted by anything anybody is saying.

“Maybe in the future, a movement is possible but right now my attention is on Villarreal. I want to focus well on my club and gain more confidence. Maybe when the time is ripe, I can move.”