Chidinma Okeke: Playing In Spain Has Helped Me Vastly Improve My Game 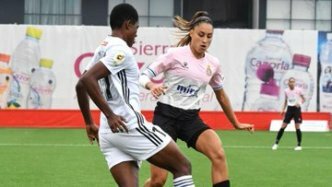 Real Madrid Femeni of Spain defender, Chidinma Okeke has admitted that taking her trade outside Nigeria to the Land of The Armada has helped her step up the quality of her game and improved herself in all aspects on the field.

Megasportsarena.com reports that, although the former FC Robo Queens of Lagos lass acknowledged that it was initially not easy for her to settle down at her new base in Madrid, she eventually found it exciting and smooth sailing, with a handful of first team appearances and starting roles for the club.

However, a bout with injury has slowed her down to a large extent, as she is still recuperating from surgery, but the former striker, alongside fellow-Super Falcons’ star, Rasheedat Ajibade at FC Robo, says she is already thinking of making a bigger impact in 2020.

It was only last month that information out of Madrid indicated that Okeke had successful surgery on the anterior cruciate ligament in her right knee, which she ruptured in a Spanish Primera Iberdrola clash with Barcelona in October.

She suffered the injury in the 25th minute of a 4-0 loss for her side at Estadio Municipal Nuevo Matapinonera and was diagnosed to be out for at least five months, thereby putting an end to her run of six games since joining the club in September.

Nonetheless, the versatile player, who can also line out in attacker, defensive midfield and right-back insists 2019 has been a magical year for her, as she also got to play at her debut outing at the FIFA Women’s World Cup in France, where she got an assist on Asisat Oshoala’s winning goal against South Korea, and sealed the move to Madrid CFF afterwards.

The 19-year-old Cupid-faced rising star went on to thank God for the grace given her to excel and to her coach at FC Robo, Emmanuel Osahon, for setting her on the right track to success in the round leather game for women, which she is happy to be making waves in already.

Okeke stated: “It’s been a good year for me. My debut at the World Cup was a great experience. Playing with great players and the big names in Nigeria, gaining more experience was good for me and I thank God for it.

“At first I wasn’t expecting my name on the final list but I believed in God so I thank him for everything and his favor. The motivation for the performance came from my mum and my coach, Emmanuel Osahon.

“Anything I do, I always remember her because she has been there for me and believes so much in me so anywhere I am I have it at the back of my mind that whatever I’m doing I do to make her happy. Same thing for my coach. He and my mum are my inspiration and motivation.

“Coach Osahon used me in different positions. Now I play as a defender and see myself as that but if I’m called to play in attack it’s not a problem but I like the right full back position as I can always attack from there too.

“It really means so much to me making my first move out of Nigeria to Spain playing for Madrid CFF. It’s a good thing and I’m really happy. Playing in Spain has improved my game, my play and decision making. I’m learning more and my game generally has improved.”