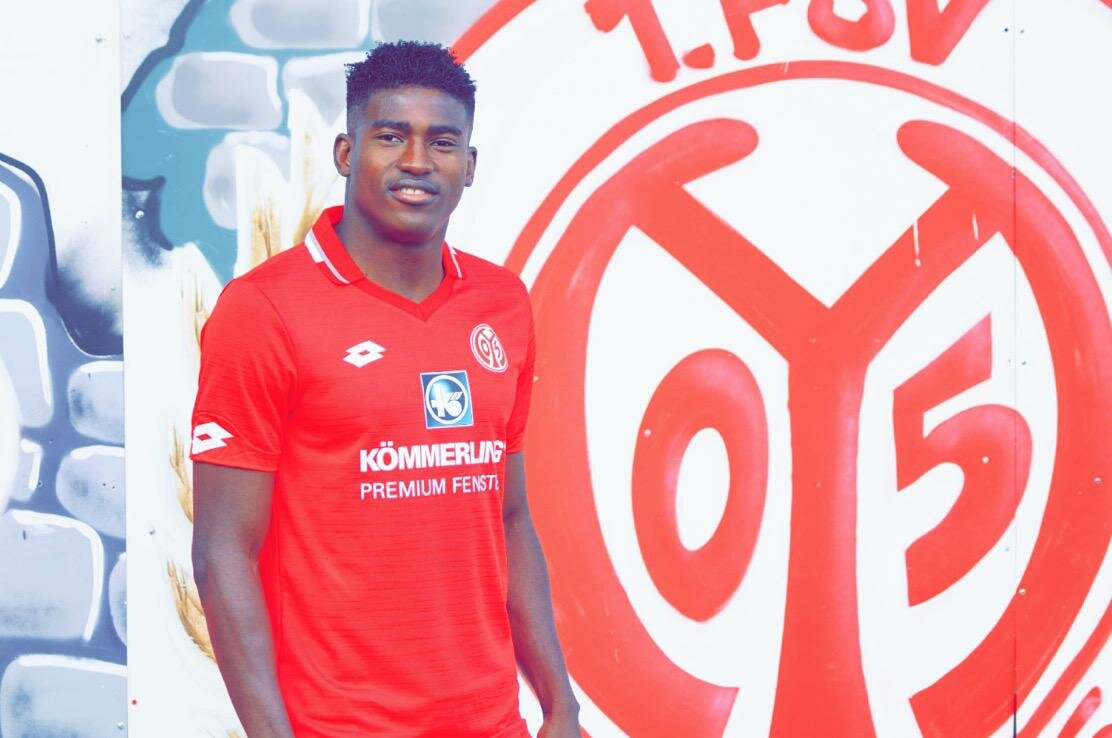 More facts have emerged in the dramatic saga that is set to see former youth international striker, Taiwo Awoniyi leave his current base at SV Mainz 05 of Germany and head back to his parent club, Liverpool of England, and it is basically because officials at the German Bundesliga side believe a rival in the team is deemed better than him.

Megasportsarena.com learnt that details of the report out of Deutschland indicate that the crew at Mainz are rating Jean-Philippe Mateta well ahead of Awoniyi as their main striker and, now that he has returned to action from a long spell out with injury, the Nigerian lad is considered surplus to requirements.

With Mateta declared fully fit and good to go, just before the winter break, Awoniyi was bound to find it harder getting regular playing time at Mianz in the second half of the ongoing season, and the club’s coach, Achim Beierlorzer did not hold anything back when he declared that the UAE 2013 FIFA U-17 World Cup gold medalist has to leave.

Consequently, further reports indicated that Liverpool are now likely to recall Awoniyi from his loan stint at Mainz before the close of the January transfer window, but the youngster is said to have already gained interest from other clubs across Europe.

That would most likely be due to his track records with Nigeria and his last base on loan from Liverpool, as he excelled in two separate seasons with Royal Excel Mouscron of Belgium, before finding time tough in his return to Germany, where he had previously played for lower division side, FSV Frankfurt, soon after shinning at the Cadet Mundial in United Arab Emirates.

This time out, though, it has been torrid all the way for Awoniyi, as he has struggled for game time with Mainz in the Bundesliga, thereby raising speculation that he could be on his way back to Anfield this month, especially as The Reds are said to be assessing proposals from other clubs around Europe for the Nigeria under-23 international.

It would mark another chapter in the chequered story of Awoniyi, ever since his signed for Liverpool in 2015 but the club have been unable to secure a UK work permit for him, amidst worries as well that he cannot find a place in their star-studded team, and he has since gone on spending back-to-back seasons out on loan.

However, various spells at FSV Frankfurt, NEC Nijmegen of Holland and KAA Gent of Belgium failed to work out for Awoniyi, until he was impressive in two stints with Mouscron, where he scored 10 goals in 28 appearances during the 2017/18 season and netted 11 times in 15 games when he returned for the second half of last season.

After that breakthrough, the 22-year-old had hoped to shine when moving to Germany last summer, but has made just six appearances for Mainz so far, as the Bundesliga strugglers tend to underrate Awoniyi, who was substituted at half-time of the only game he started for the former team of Anthony Ujah and Leon Aderemi Balogun, when they were down to 10 men away to Fortuna Dusseldorf, and he has gained only 150 minutes of action in total this term.

All this has created speculation that he is heading for a repeat of what happened to him around this time last year, when Liverpool cut short his loan spell at Gent, due to a lack of playing time and first team opportunities during the first half of the 2018/19 season.

Since making his full debut against Fortuna Düsseldorf on October 19, the 22-year-old Awoniyi has not started a single game in the German Bundesliga, but, while Liverpool have the option to terminate his loan agreement, they are aware that he would prefer to remain in Germany.

That has put a tight spot on the cards for Liverpool, who intend to meet some interested clubs in the coming days, as Montpellier, Brest and Nimes of France, Olympiakos of Greece, Besiktas of Turkey as well as Leganes and Real Mallorca of Spain are all said to be keen on taking him.

However, while all the said clubs appear eager to have Awoniyi on loan or even a full transfer, the verdict out of Mainz is not encouraging, with the gaffer insisting that the enterprising striker has not been able to prove that he deserves a place in the squad.

Beierlorzer told German newspaper, Kicker: “He is a very young player who has athleticism, speed and a good shot, everything you need. But you don’t play because you have everything, but because you are effective, I have to make that clear.”