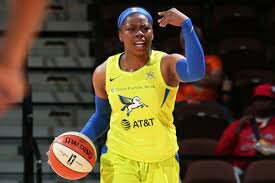 Dallas Wings of America sensation, Arike Ogunbowale was again in top form for her side in USA’s Women’s National Basketball Association (WNBA), as she helped her side eke out yet another victory, megasportsarena.com reports.

Ogunbowale, who beat the shot clock with a huge three-pointer to give Dallas a 75-68 lead with 2:20 remaining, scored 10 of her 15 points in the second half to help her side overcome Chicago Sky 80-76, in which Allisha Gray added 20 points.

Allie Quigley made her sixth 3-pointer with 52.7 left to pull Chicago within two points, but Moriah Jefferson answered with a basket in the lane and the Wings led by two possessions the rest of the way.

Isabelle Harrison had 15 points and six rebounds and Jefferson had 11 points, five rebounds and eight assists for Dallas (10-13), as The Wings outrebounded Chicago 45-32.

Copper and Candace Parker each went down with apparent ankle injuries in the third quarter. Copper returned to the court early in the fourth, but Parker remained on the Chicago bench with ice wrapped around her left ankle.

Same night in the WNBA, Nneka Ogwumike survived a mid-game scare, which saw her temporarily leave the court, to resume action and helped Los Angeles Spark snatch victory in overtime against Atlanta Dream.

Ogwumike, who went to the locker room in the first half but returned to start the third quarter, had 13 points, nine rebounds and nine assists, Amanda Zahui B. had 14 points, seven rebounds and four assists.

Brittney Sykes scored 17 points to lead six players on Ogwumike’s side in double figures as The Sparks went on to record an 85-80 conquest over The Dream from the game that went into overtime.

Sykes opened overtime with a basket for Los Angeles’ first lead since 24-23. Kristi Toliver, who forced the extra period, gave the Sparks a six-point lead with 2:13 left and they led by at least three points the rest of the way.

Courtney Williams missed her first eight field goals but made a jumper with 52.8 seconds left in the fourth quarter to give Atlanta a 72-70 lead.

She made another from the same spot at 5.4 for a 74-72 lead but after a timeout, Toliver sank a shot over the outstretched arm of Williams to force overtime.