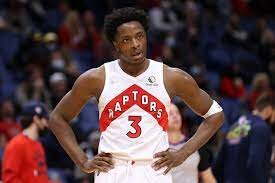 Toronto Raptors o0f Canada’s Nigerian-born ace, OG Anunoby was in top form for his side, but his effort could not save them from losing at home in USA’s National Basketball Association (NBA) league.

Megasportsarena.com reports that, in spite of Anunoby’s game high 26 points on the night in Toronto, the former champions fell 112-97 against visiting Philadelphia 76s in Game 2 of their NBA playoff series.

Joel Embiid scored 31 points and 11 rebounds to lift the host Philadelphia past The Raptors and took a 2-0 lead in their Eastern Conference opening round.

Tyrese Maxey added 23 points, nine rebounds and eight assists, Tobias Harris contributed 20 points and 10 rebounds and James Harden chipped in with 14 points as The Sixers defended their home court with a pair of wins.

Danny Green also had 11 points in what was the 100th career playoff win for Philadelphia’s head coach, Doc Rivers.

The Bucks bounced back, after blowing a 16-point lead in Game 1 of the Eastern Conference series.

The Bulls got the margin down to one but could never regain the lead, as Zach LaVine missed a potential tying 3-pointer from nearly 30 feet away with 29 seconds left.

The Bucks have won 17 of their last 18 meetings with The Bulls, who had Nikola Vucevic on 24 points and 17 rebounds, including all five matchups this season.