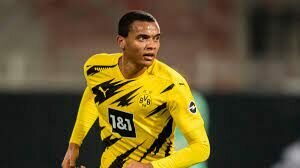 Borussia Dortmund of Germany ace, Manuel Akanji has declared that he is staying fully focused on helping his side soar in the German Bundesliga and not bothered by transfer talk linking him wirth Manchester United of England.

Although the Nigerian-born Switzerland international admitted he is always desirous of making a step up in his professional career, he insisted that the only thought on his kind for now is about BVB.

Megasportsarena.com reports that this comes against the backdrop of recent information that Manchester United have placed a premium on snatching Akanji as part of their transfer scoop in the summer.

However, while an additional reported that suggested Akanji had rejected a new contract offer from Dortmund and could leave for £20m during the next window, the stopper said he is leaving the door open on his options.

In the same vein, United’s coach, Ralf Rangnick lamented over the club’s poor recruitment in recent years and pointed to Arsenal as an example of how a team can rebuild the right way after many years of woes and no participation in the UEFA Champions League.

Akanji, though, is keeping mum on reports that United could look to sign a new centre-back at the end of the season, with the Dortmund defender one of those regularly linked with a move to Old Trafford.

“I am fully focused on Dortmund at the moment. We will see what happens in the future. I’m totally happy to play in this team.

“I think I have an important role and I want to perform until the end. We’ll see in the summer how things go,” Akanji stressed.