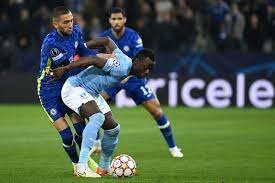 FC Lorient of France midfielder, Innocent Bonke was not listed for his side’s French Ligue 1 clash with Paris-Saint Germaine on account of accumulated yellow cards, but Terim Moffi netted one in their side’s heavy defeat.

Aside his suspension, fitness issues were also cited in circumstances surrounding Bonke’s absence in Sunday’s match at Parc des Princes, as the former Malmo FF of Sweden battler copped a knock on international duty.

Megasportsarena.com reports that the box-to-box midfielder suffered an injury during Nigeria’s goalless draw away to Ghana in Kumasi on March 25, thereby compounding his absence due to accumulation of yellow cards.

Bonke, who landed in Lorient in the winter transfer market, got yellow cards against Montpellier, Stade Brestois and Clermont Foot, with his fourth caution of the year coming in his last game before the break against Strasbourg.

In his absence, Moffi became the Nigerian lad to follow and celebrate in Sunday’s match against Lionel Messi, Neymar and Kylian Mbappe, against who the in-form attacker was one of five strikers named in Lorient’s squad.

Although Moffi’s 56th minute goal during the game caused some ripples in the French capital, as it took the scoreline to 2-1, his team could not hold their own against the Parisian club.

A hat-trick by Kylian Mbappe and his assist to Lionel Messi put PSG in full control of the encounter, from which they emerged unscathed and kept intact their accolade as the only team unbeaten at home so far this season in Ligue 1.

Akanji Insists He Is Focused Only On Dortmund, Not Man United Link