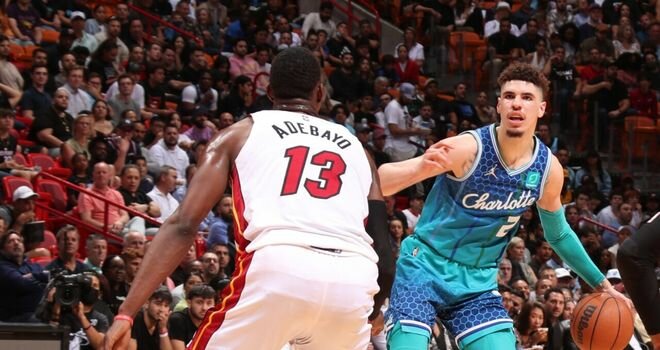 Miami Heat of America sensation, Bam Adebayo was again in top form in USA’s National Basketball Association (NBA) league, and his 22 points on the night helped his side cruise to a 144-115 away to Charlotte Hornets, megasportsarena.com reports.

Adebayo, though, was not top of the nets for The Heat, as Tyler Herro scored 35 points off the bench for the team from Miami, on a night they moved closer to clinching number one seed in the NBA’s Eastern Conference playoffs.

Their win over The Hornets also means Adebayo’s side won their fifth straight game and posted their second-highest points total in their franchise history, while their hosts allowed 144 for the second consecutive game.

Charlotte, who previously fell in a 144-112 loss on Saturday to Philadelphia 76ers, found their woes compounded when Jimmy Butler added 27 points and Duncan Robinson broke out of a recent scoring slump with 21.

Adebayo’s side, though, still need to win one of their two remaining games to secure top spot in the East, though things looked rosy in Charlotte, especially as The Heat finished 23 of 42 from three-point range.

Herro was 8 of 14 from behind the arc and tied Dwyane Wade’s single-game record for points by a Heat reserve, while Robinson shot 7 of 11 on three-pointers after averaging 5.7 points in his previous six games, including two scoreless outings.

Miles Bridges scored 29 points and LaMelo Ball finished with 18 points and 14 assists for Charlotte, who dropped to 10th in the East but has clinched a berth in the play-in tournament.