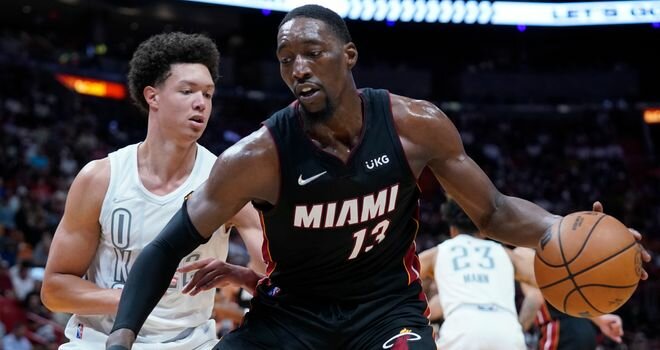 Miami Heat of America ace, Bam Adebayo was in top form once again and helped his side ease to victory away to Oklahoma City Thunder in USA’s National Basketball Association (NBA).

However, while Adebayo put in a huge shift on the night, the spotlight was stolen by Tyler Herro, who survived an ankle scare as he scored 26 points, but The Heat soared above The Thunder 120-108.

Megasportsarena.com gathered further that Duncan Robinson scored 19 points in 19 minutes of action for the NBA’s Eastern Conference-leading Miami-based side.

Adebayo had 19 points on eight-for-10 shooting and Kyle Lowry added 16, as Shai Gilgeous-Alexander played through ankle soreness and scored 26 points for the injury-depleted Thunder, who have dropped eight straight and reached the 50-loss mark in back-to-back seasons.

Elsewhere in the NBA, LeBron James led the Los Angeles Lakers to a 128-123 overtime win over the Toronto Raptors on Friday.

James flirted with a triple double in the effort, scoring 36 points grabbing nine boards and dishing out seven assists.

Russell Westbrook posted 22 points, 10 assists and 10 rebounds in The Lakers’ win over The Raptors.

Brooklyn Nets forward, Kevin Durant was fined $25,000 by the NBA for directing obscene language towards a fan earlier this week.

The league said the incident occurred with 9.4 seconds left in the second quarter of Brooklyn’s 113-111 home loss to the Dallas Mavericks on Wednesday.