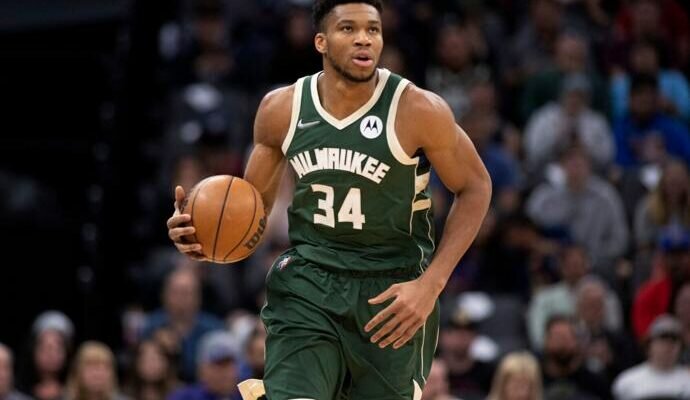 Milwaukee Bucks of America sensation, Giannis Adetokunbo (Antetokounmpo) has been rated ‘hungrier and greedier,’ after helping his side to victory over Sacramento Kings in USA’s National Basketball Association (NBA).

Megasportsarena.com reports that Bucks teammate, Wesley Matthews, was reeling lyrical for Antetokounmpo, after the Nigerian-born Greece international hit 36 points and 10 rebounds in their 135-126 victory on Wednesday night.

Nigerian national team, D’Tigers’ star, Chimezie Metu was in action for The Kings, who fell to 3-8 since the All-Star break, despite getting 22 points from Domantas Sabonis and Fox added 21 points on 8-of-23 shooting.

After making a 3-pointer to put Kings ahead by five in the second quarter, Metu sprinted back and blocked a shot attempt under the basket by Antetokounmpo, who needs 135 points to pass Abdul-Jabbar’s team record of 14,211.

Former UFC light heavyweight champion, Chuck Liddell sat next to Favre in the second half, before which The Bucks fell behind early, tied the game midway through the second quarter on a pair of 3s from Middleton and went ahead 51-50 when he made a free throw after Fox was called for a technical.

The 52-year-old Favre, who retired from the NFL in 2010, wore a bright yellow Southern Miss beach volleyball shirt, in an ode to his alma mater, but it was The Bucks’ night, as Matthews made a clutch 3-pointer with 1:32 remaining, and Milwaukee held off The Kings.

The Bucks did not pull away until late in the fourth, after De’Aaron Fox’s three-point play gave Sacramento a 123-120 lead, Holiday and Middleton made consecutive 3s.

Fox answered with a 3-pointer to tie it before Matthews hit his go-ahead shot from beyond the arc, while Antetokounmpo followed with a hook shot and two free throws, and Portis sank two free throws.

Antetokounmpo brought The Bucks’ bench to its feet when he grabbed a defensive rebound and raced past several Kings’ players to throw down a one-handed dunk.

Matthews followed with two free throws to put Bucks up by seven at halftime, while Donte DiVincenzo made a leaping steal of an inbounds pass near Milwaukee’s basket and tipped it to Davion Mitchell, who went the other way and scored a breakaway layup to pull Sacramento closer at 108-105.

Antetokounmpo had his fifth straight game with 30 points or more as he eyes Abdul-Jabbar’s franchise scoring record, while the NBA’s defending champions pulled within two games of Miami Heat atop the log.

The race continues for the top seed in the NBA Eastern Conference, with Giannis ‘The Greek Freak’ roaring strong, as the two-time MVP shot 12 of 23, made 12 of 16 free throws and dominated a stretch late in the third quarter.

“He wants to be better than he was last year. That’s just how he is. That’s how he’s wired.”

Antetokounmpo responded gleefully: “That’s the beauty of this team, it’s not always me. Everybody has to come in and do their part.

Eguavoen Reveals Details Of His ‘Balanced Team’ For Clash With Ghana