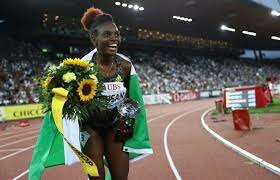 History-making Nigerian female athlete, Tobiloba Amusan has disclosed how enduring a disappointing outing at the recent Olympic Games in Tokyo Japan spurred her to glory at the IAAF Diamond League in Zurich, Switzerland.

Megasportsarena.com reports that Amusan stated as much after winning the Diamond League’s 100m hurdles event on Thursday, as she ran the race of her life to clock 12.42 seconds in the final.

Indeed, Thursday’s feat was a huge turnaround for Amusan, who missed out on a medal by the whiskers in Tokyo, where she placed fourth, after being pipped by Jamaica’s Megan Tapper, while Nadine Visser of Netherlands finished fifth.

The same trio claimed the top three spots in Zurich, with Visser holding on to finish runner-up in a Dutch record of 12.51, as Tapper placed third in 12.55s while USA’s Payton Chadwick finished fourth in a personal best time of 12.62.

In scorching to a to a new 12.42secs African record at the Weltklasse in Zurich, the 24-year-old also made history, as she became the first Nigerian to become a champion on the elite circuit since World Athletics’ one day showpiece changed from Golden League to Diamond League.

She is also the second Nigerian to win a World Athletics elite discipline after Falilat Ogukoya was crowned the 400m champion at the Grand Pix final in Moscow, Russia in 1998; while also becoming the third Nigerian to win at Lezigrund Stadion.

Her feat at the highly rated Weltklasse Diamond League meeting follows earlier achievements recorded at the same venue by Innocent Egbunike and Seun Ogunkoya, but the heroine of the moment is now the highly amiable Amusan.

She is also the second Nigerian to set a new African record at the meeting, after Egbunike ran 44.17 seconds to set a then African 400m record.

After bettering the time Alozie ran in Monaco in 1998, Amusa, who is also the reigning African champion, has now broken two of the three Nigerian and continental records held by the ace of Spain.

She smashed Alozie’s 12.74 seconds African Games record twice two years ago in Rabat, Morocco, running 12.69 in the semi-final heat before improving by one hundredth of a second to 12.68 seconds.

Last year in Karlsruhe, Germany, Amusan went close to breaking the 7.82 seconds 60m hurdles indoor record held by Alozie when she stormed to a 7.84 seconds to win at the World Indoor Tour event.

Amusan would also have broken the Nigerian championships 100m hurdles record of 12.63 seconds held by Angela Atiede if the electronic timer had not malfunctioned at the Tokyo 2020 Olympic Trials at Yaba College of Technology Sports Ground last June.

She was credited with a hand-timed 12.30 for her effort, but she has now not only emerged as the 2021 Diamond League Champion, she has also won the $30,000 top prize money on offer as well as a wild card for next year’s World Athletics Championships in Oregon, USA.

It also marks a remarkable recovery from her agonising setback at the Tokyo Olympics, where she missed out on a medal as widely expected, but she has recovered well enough to show lots of composure and tenacity.

It was just this past weekend that Amusan emerged tops at the Continental Tour Gold meeting at Stadion Slaski in Chorzow, Poland.

That was on Sunday, when she won the 100m Hurdles event with a time of 12.64s ahead of Olympic bronze medalist, Megan Tapper who clocked 12.75, while he USA’s Christina Clemons was third in 12.92.

Her winning time at the Citius Meeting was 12.80s, ahead of Poland’s Klaudia Siciarz and Australia’s Clay Liz, but Thursday’s feat has become crème-de-la-crème for the Nigerian Amazon.

Amusan disclosed afterwards that she was determined to make up for her inability to make the podium in Tokyo and feels happy to have made history, adding: “It’s great, it is a great feeling.

“Looking back, I did not win a medal at the Olympics. It was a very challenging time for me afterwards, but I never gave up, and I came out here.

“I was like… if I did not get a medal in Tokyo, the least I can do is to get a Diamond League Trophy – I did just that.

“The hurdles event is a very mental event and my coach is always telling me I need to focus on myself and execute. Once you execute, you don’t have a problem going over the hurdles.

“I’m glad I came out with a win. I have one more meeting in Zagreb, and I can go take the season off. I am really looking forward to it.

“I did not win a medal at the Olympics. It was a very challenging time for me afterwards, but I never gave up.

“I came out here and I was like, if I did not get a medal in Tokyo, the least I can do is to get a Diamond League Trophy, and I just did that!”