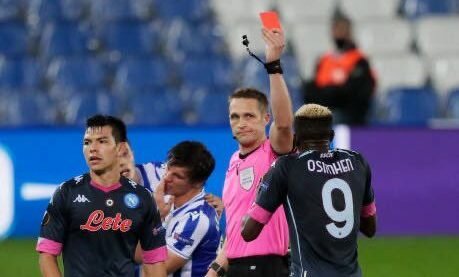 Confirmation that SSC Napoli of Italy striker, Victor Osimhen has been cleared to play for the club in this weekend’s Italian Serie A clash versus Juventus has left his agent excited, as he believes his ward has been vindicated that he had been harshly sent off two weeks ago.

That is the verdict of Italian players’ representative, Andrea D’Amico, who brokered the deal that took Osimhen to Napoli from Lille Metropole of France last summer, as he stressed that he had posited all along that the red card the lad got against Venezia was unjust.

D’Amico insisted the sending off Osimhen got on the opening day of this season’s fixtures in the Serie A was done in error, as the decision had been taken without the match official at the centre consulting video assistant referee.

Indeed, many observers cried wolf when Referee Aureliano independently took the decision to send off Osimhen, after the former VfL Wolfsburg of Germany and Sporting Charleroi of Belgium youngster waved his arm and hit an opponent in the face.

Napoli’s record acquisition was initially suspended for two matches but the Naples-based side successfully appealed for a reduction of the punishment to one game, so he will be available for selection this weekend against Juventus.

However, while Osimhen will be available for this weekend’s battle with Juventus, he has to pay a bigger fine for his red card against Venezia, as the original ruling was for him to pay a fine of five thousand Euros and banned from playing two straight matches.

He ended up missing just one game, which was a 2-1 win away to Genoa, following which a successful appeal by Napoli means he can now play this Saturday, but the Chile 2015 FIFA U-17 World Cup top scorer will now have to cough out a tripled fine of 15,000 Euros.

Nonetheless, D’Amico is excited that Osimhen will be available for selection when Napoli step out in search of a third straight win of the season against Juventus on Saturday, as the agent reckoned that The Blues missed the youngster, despite winning away without him.

D’Amico told Radio Kiss Kiss: “Glad that the disqualification of Victor Osimhen has been reduced. His reactions are the result of sporting provocations or excessive competition.

“Slap but certainly not slap. They’re giving him a label he doesn’t deserve. His absence deprived the match of an important player who can contribute to the show.”