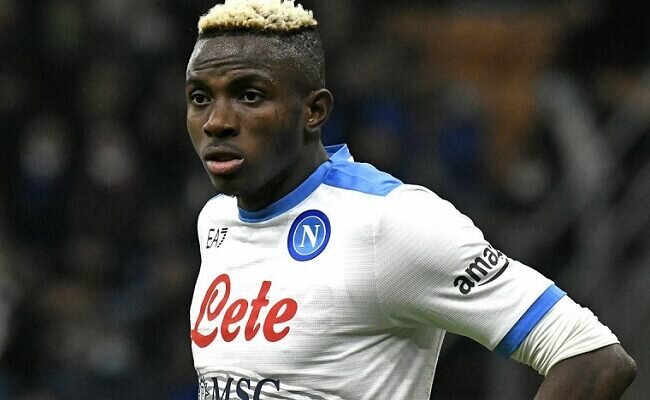 SSC Napoli striker, Victor Osimhen’s ongoing summer transfer saga has entered a new twist, with latest reports indicating that technical buffs att his Italian Serie A club have cited a striker from Albania as his most likely replacement, megasportsarena.com gathered.

The report out of The Land of The Azzurri indicates that the man now being tipped to replace Osimhen, should the Super Eagles’ hitman move this summer, is Armando Broja, who is currently on loan at Chelsea of England.

Incidentally, a move to England is top on the cards for Osimhen, as he is currently on the radar of Newcastle United, Arsenal, Liverpool and Tottenham Hotspur, but Italian sports daily, Gazzetta dello Sport disclosed that a deal might come through only if Chelsea agree to sell Broja.

While the hunt is on for Osimhen, who has scored 16 goals in all competitions so far this season, the quest for his successor at Napoli is now dependent on if Chelsea’s coach, Thomas Tuchel will allow Broja leave at the end of this season.

Broja has impressed on loan at Southampton with nine goals in 35 outings, thereby raising suggestions that Tuchel will recall him for the 2022/23 campaign.

However, should that happen, it could block the exit door from Napoli for Osimhen, whose current contract expires on June 30, 2025.

Nonetheless, there is also a hint that top shots at his Naples-based side would be ready to accept any formal offer of 100m euros for the 23-year-old lad, who became the most expensive African player in history with his 70m euros switch from Lille Metropole of France.