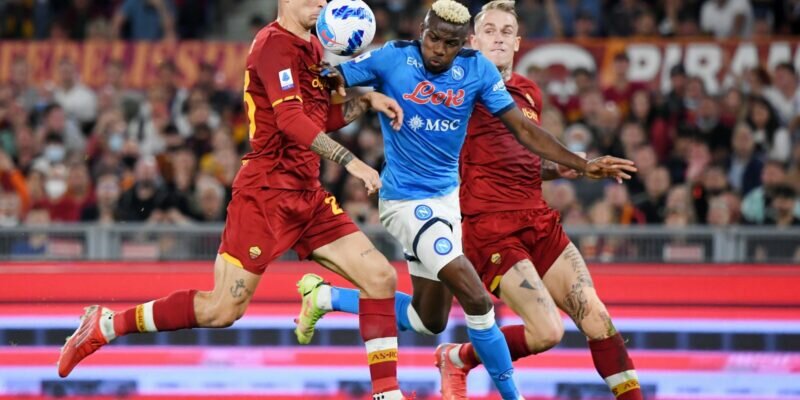 SSC Napoli of Italy striker, Victor Osimhen is in agony, after he failed to score in his side’s 1-1 draw versus AS Roma, megasportsarena.com reports.

Osimhen had been keen on adding to his goals haul with a sterling outing on Monday, but he ended up firing blanks, meaning he still has five games to equal his personal best achieved during his time at Lille

Osimhen’s fans would also feel deflated that he could not equal his personal goals’ record, having failed to hit target in Monday’s draw.

Prior to the game at Diego Armando Maradona Stadium, Osimhen was a goal short of matching his record of goals scored in a single European league season.

During the 2019-20 season at Lille, Osimhen found the net on 13 occasions – a feat that inspired his move to the Italian elite division giants.

However, while Nigerian-born striker, Tammy Abraham got an assist on Roma’s lone goal, Osimhen could not add to his 12-goal tally, despite his presence for 82 minutes before he was subbed off for Dries Mertens.

Still hurt by their 3-2 home defeat to Fiorentina, Luciano Spalletti’s team welcomed The Yellow and Reds to Naples for their 150th Derby del Sole.

Although Jose Mourinho’s side started on a positive note, it was the hosts who took the lead after 11 minutes as Roger Ibanez fouled a goal-bound Hirving Lozano.

The visitors regrouped and they could have levelled matters five minutes before the half time break, however, Lorenzo Pellegrini’s free-kick deflected off Osimhen to sail over the crossbar.

Even with their lead, Napoli suffered a minor setback as Stanislav Lobotka was forced off injured. He was subsequently replaced by Piotr Zielinski.

Ten minutes before full time, Osimhen was close to scoring his side’s second goal but he could only hit the side netting. Following his replacement two minutes later – a decision that encouraged Roma to attack in numbers and that paid off.

With The Parteneopeans looking destined to end the game as winners, super-sub Stephan El Shaarawy broke their hearts with a last-gasp equaliser with Abraham providing the assist.