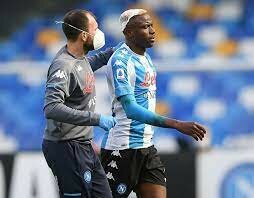 SSC Napoli of Italy striker, Victor Osimhen has been cast in doubt for an appearance with the Italian Serie A side in this week’s UEFA Europa League clash away to Leicester City of England, megasportsarena.com reports.

While Osimhen would have loved to be up against the team that has the Nigerian trio of Wilfred Onyinyen Ndidi, Kelechi ‘Kelz’ Iheanacho and Ademola Lookman in their ranks, the former VfL Wolfsburg of Germany, Sporting Charleroi of Belgium and Lille Metropole of France hitman has been rendered doubtful by injury.

This is contained in a report by Italian publication, Tuttonapoli, which disclosed that Osimhen copped a knock in action against Juventus last weekend and will now have to be assessed by Napoli’s medics ahead of Thursday’s game.

This comes after Osimhen was replaced n the 90th minute of Saturday’s game and later details revealed that he actually suffered an injury during the Serie A fixture, which saw him make way for Andrea Petagna.

It has come to light that Osimhen was replaced due to muscle fatigue, thereby leaving Napoli’s coach, Luciano Spalletti facing the prospect of going into the Europa League group stage match against Leicester without the Naples-based club’s costliest transfer ever..

A report by allnigeriasoccer.com added: “Napoli reported via their official website that Osimhen was present at the SSC Napoli Konami Training Center this morning and underwent an individual session on the pitch.

“The 22-year-old has started two of the three games contested by the Blues in the Italian top-flight so far this season but has yet to open his account.

“It was his third game for club and country in eight days, having started both matches played by the Super Eagles in the 2022 World Cup qualifiers against Liberia and Cape Verde.”

A report on Naploi’s website also stated: “The squad kicked off the session with a practice game using smaller goals, followed by group tactical work.

“Those who weren’t involved from the start in the defeat of Juventus then got stuck into a minimatch.

“Dries Mertens and Faouzi Ghoulam trained with the group for the full session, while Diego Demme and Victor Osimhen had individual sessions outside.

“Stanislav Lobotka received treatment and did individual work outside, with Lorenzo Insigne training in the gym after he picked up a knock on Saturday.”