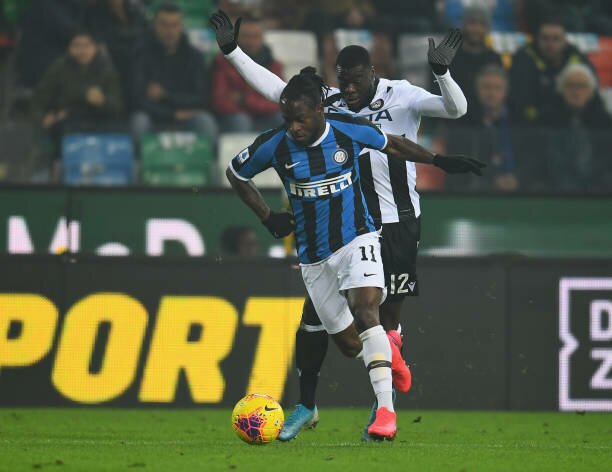 Inter Milan of Italy winger, Victor Moses has set his sight on a revival for his club this weekend, when they take on SS Lazio in the Italian Serie A, as he admits only victory will help them finally overcome the agony of losing at home against AS Napoli in midweek, megasportsarena.com reports.

In the wake of his side’s loss to Cagliari, which was the first defeat he would suffer since joining the club on loan from Chelsea last month, Moses is backing The Nerazzurri for an instant lift, as he says they must not be held down by Wednesday’s loss to Napoli in Coppa Italia.

Moses admitted losing at home to Napoli in the first leg of the Coppa Italia semi-finals at San Siro was not what he and his colleagues bargained for, but when on to stress that the love and zeal of playing under his favourite coach, Antonio Conte, will help him work hard to see that Inter win the reverse at Stadio San Paolo on March 5.

Before then, The Nerazzurri will be back in Serie A action this Sunday, when they play away to another in-form side, as Lazio are just one point behind them in third place on the log, and the former Super Eagles star is looking at last weekend’s dramatic 4-2 comeback derby victory over local rivals, AC Milan, while Partenopei lost at home to Lecce.

The 29-year old winger-cum-wing-back, who has featured four times in all competitions for Inter since cutting short his initial loan at Fernebahce of Turkey, thanked Conte for making his early days in Italy easy and declared that the Italian gaffer, who he also played under at Chelsea, is one of the best in the world, hence his verdict that Inter will rise fast under the boss’ charge.

Moses retorted: “He is one of the best coaches in the world: he played football, he has a lot of passion. I am very happy to work with him also here after the Chelsea experience. It is important for me to put myself at the service of the team and my teammates. We spent a lot of Sunday in terms of physical and mental energies, but this cannot be an excuse. We are very disappointed for this defeat, but we must not lose heart: we must win on the return.”