Victor Moses: Inter Milan Will Try To Improve Against Lazio On Sunday 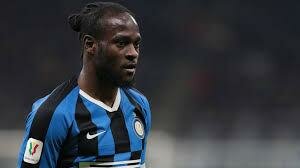 Inter Milan of Italy winger, Victor Moses has admitted that he and his teammates were hurt by their loss to AS Napoli in Coppa Italia during the week, but declared that they will put in extra effort in other to redeem themselves this weekend versus SS Lazio in the Serie A.

Megasportsarena.com reports that, heading into Sunday’s game in Rome, Moses is determined to play a key role with his side, as he wants them to recover quickly from what his first defeat since arriving on loan from Chelsea of England.

He added that he is now extra motivated to help The Nerazzzurri shine, following their after 1-0 defeat by Napoli in the Coppa Italia semi-final first leg encounter at San Siro on Wednesday night.

Inter will be aiming to get back to winning ways as they travel to the Italian capital to face in-form Lazio on Sunday’s Serie A fixtures who are just one point behind them in third place, with Moses again expected to play a pivotal role in his club’s charge for revival

The 29-year-old was one of three former Premier League players to join Antonio Conte’s side in the January window, alongside Ashley Young and Christian Eriksen but the former Super Eagles winger is making his fourth appearance for The Nerazzurri.

However, Fabian Ruiz Pena’s second-half strike was the only goal in the Coppa Italia semi-final first leg as Inter Milan will hope to reverse the deficit in the second leg which takes place on March 5 at the San Paolo.

The former Super Eagles’ star, who went on in the 74th minute, believes Inter were tired during the match following their 3-2 victory over AC Milan in Serie A on Sunday as he the club TV after the encounter he said: “We were kind of tired after the match against AC Milan last Sunday.

Moses added: “Football in Italy is so tactical, we have a fantastic manager, and my goal is to help my teammates on the pitch always.”I am very happy to work with him also here after the Chelsea experience.

“We are upset at the outcome, but Inter needs to start winning again in our next match and look forward. We will try to improve against Lazio in our next fixture and do our best, but we are disappointed with today’s result.”