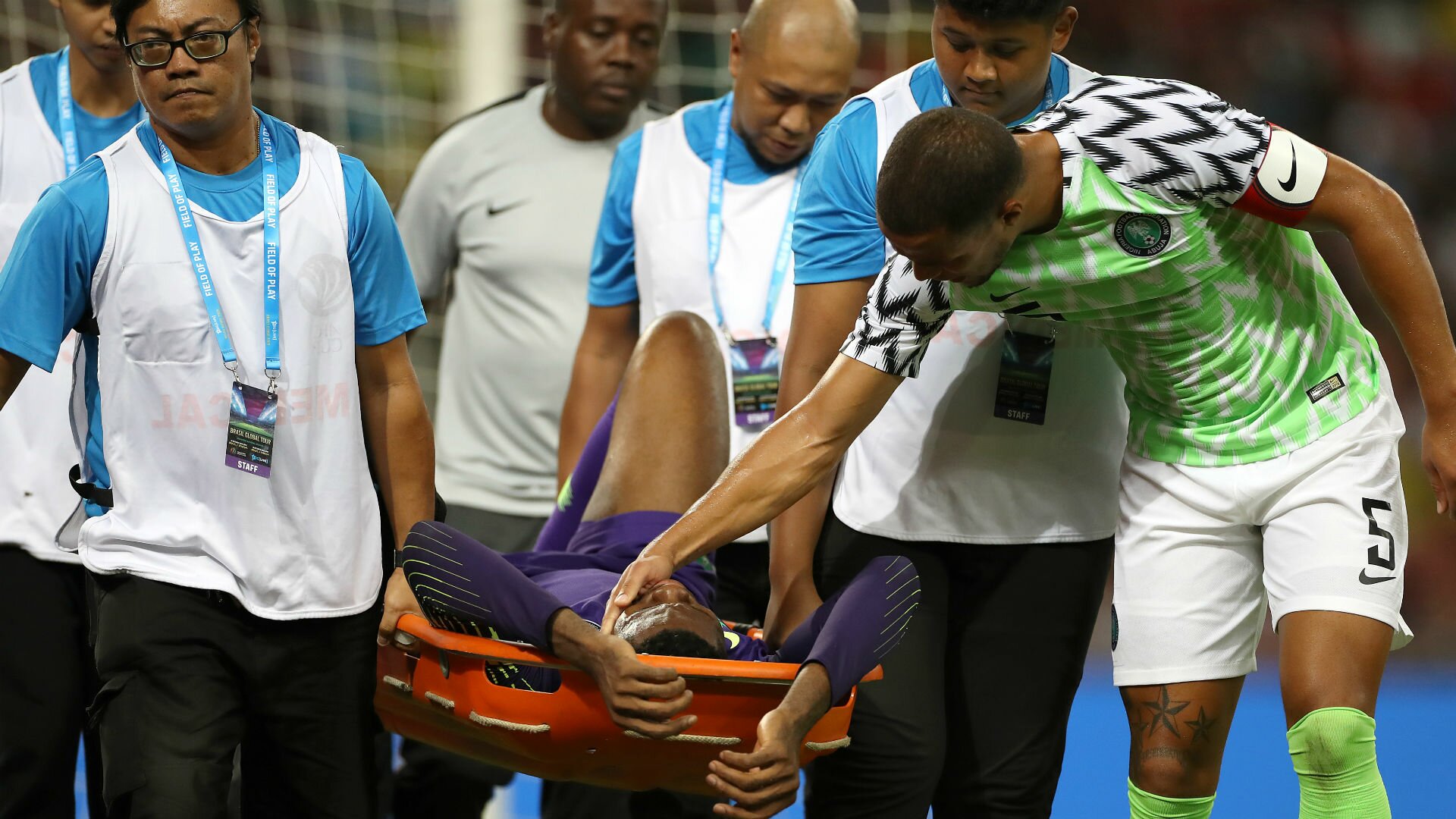 Fortuna Dusseldorf II of Germany goalkeeper, Emil Maduka Okoye has sent out a get week quick message to Omonia Nicosia of Greece shot-stopper, Fancies Odinaka Uzoho, who got injured in action for the Super Eagles against Brazil, megasportsarena.com reports.

Although Uzoho’s forced exit midway through the second half of the encounter meant Okoye got the chance for his Nigeria debut, the Germany-born lanky lad is modest enough to wish the man he replaced well, and pray that he returns better than ever.

Uzoho’s exit gave Nigerians the long-awaited opportunity to see Okoye in action, before which he had been derided for making do with performances for the reserves’ squad of Dusseldorf in the fourth-tier of German football, which many critics believe is not a level good enough for anyone being invited to the national team.

However, any smirks the lad had before stepping off the bench at Singapore National Stadium must have died instantly, as he put up a brilliant show of great confidence, good composure at crosses, firm ball handling abilities, great positioning and creative serving skills.

All of these attributes left Nigerians sheathing their swords about the qualities Okoye is bound to bring into the Eagles and, though some die-hard critics insisted he did not get any test from the Brazilians that might prove or disprove his qualities, many analysts are of a view that he could jolly well grow to become Nigeria’s next number one, even with Uzoho still in the team.

However, the mulatto lad is not getting carried away with his clean sheet on his debut, against a top-notch for that matter, as he would rather keep the focus on the injured Uzoho, with a prayer for his speedy return and thanked Nigerian fans for helping him get his debut cap.

He took to social media to reveal his reflections about Sunday’s match, with an additional, line of reasoning that he now has to work even harder with club and country, in order to consolidate on the giant strides he acquired with his second half show against Brazil.

Okoye posted: “Glad to have made my debut for Nigeria. It’s a dream come true playing for my beloved country. Now it’s time to work even harder! Wishing my brother @Uzohof a speedy recovery . Thank you Nigeria!”

Eagles’ coach, Gernor Rohr also spoke on the issue, with a declaration that he is Rohr is hopeful the injury suffered by Uzoho is not serious.

Rohr added: ”Francis had a great match, we regret so much his injury, he will have examinations tomorrow so we will see exactly. He is playing again in his club so he can come back with us to play. I hope he will not be out for a long time because we have two important matches to play, against Benin in Nigeria and Lesotho, so we have a lot of work to do.”