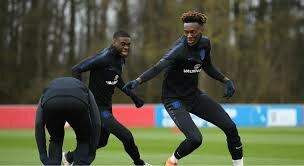 Chelsea of England defender, Fikayo Tomori has hinted that the failure of Nigeria Football Federation (NFF) to approach him to switch allegiance to the Super Eagles propelled his decision to take up the opportunity of playing for England at senior level, megasportsarena.com reports.

As he prepares for his likely senior debut for England in upcoming European Championship qualifiers against Czech Republic and Bulgaria, Tomori alleged that the NFF did not consider him good enough for an invitation, hence the long silence they had over his status.

The dark-skinned stopper’s declaration might have also taken in the country of his birth, Canada, as Tomori pointed out that the two countries he was eligible for did not deem it fit to invite him at any point in time, before England eventually did so last week, and he quickly jumped at the opportunity, as no other opening was available for his international career.

He went on to reveal, though, that he still took it upon himself to discuss the matter with his parents, who he says finally gave him the go-ahead to accept England’s invitation and he is now inclined towards making the best of his debut that is looming large this week.

This declaration could be an eye-opener for the NFF, as the 21-year-old was eligible for Nigeria at senior level, despite representing Canada and later England at youth levels and, though Eagles’ coach, Gernot Rohr once said he contacted the lad over the possibility of switching allegiance, the Chelsea lad is telling a completely different story..

He, however, admitted towards the end of September that he was torn between playing for Nigeria, Canada or England, but has now hinted that the NFF did not move fast to include him in the squad list to battle Brazil this Sunday, even when he had an emotional attachment for the Eagles due to his father’s ancestral origin in the West African country.

It was almost a week after that roster was released that England added Tomori’s name to their list for their upcoming Euro qualifiers, and the lad has now affirmed that he was left with no choice but to take up The Three Lions’ opportunity when he was called up by Gareth Southgate.

He pointed out further that he was disappointed not to have been called up by either Nigeria or Canada during the last international break and disclosed that, when only England invited him this time, he spoke with his family and they all agreed that he should go ahead and play for the Lions.

Tomori said: “When England came calling, it was difficult to say no. The last international break I didn’t get a call-up from anyone. This international break, I was waiting for a call up and England called me up. It wasn’t England all the way. I had certain people and certain things that I had to consider. I spoke to my family and people that I care about it and that’s the decision I came to.”