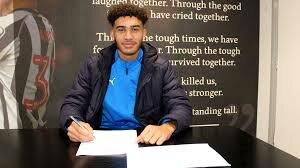 Tottenham Hotspur have added another youngster to their array of Nigerian-born players, as The Lilly Whites have added the enterprising and versatile Temidire Emmanuel Okuwa to join fast-rising defender, Timothy Eyoma, goalkeeper Joshua Oluwayemi, center half Jubril Okedina and striker Kion Etete in their youth squad.

Okuwa joins the Nigerian-born quartet, who are all classed as under-21 players and scholars, in Spurs’ youth ranks, after he completed his transfer from London rivals, West Ham United, and will line out with the under-14 team of his new club this season.

Interestingly, megasportsarena.com can further report, Okuwa can play several positions in defence and he is also comfortable playing as a central and defensive midfielder, but the promising teenager was forced to leave West Ham, where he had been since nine years.

He went on trial at both Chelsea and Tottenham, but dumped The Blues and picked Spurs due to the pathway he is bound to get from their academy to the first team and for development reasons, alongside Eyoma, Oluwayemi, Okedina and Etete, who have been upgraded to full scale contracts and scholars.

England U17 World Cup-winning right back Eyoma made his senior debut for Spurs in an FA Cup clash against Tranmere Rovers last season and was on the bench against Burnley in a Premier League game on December 15, 2018.

This season, the 19-year-old captained Spurs U23s in matches against Liverpool and Manchester City in the Premier League 2, while Okedina has been promoted to the same squad after lining out for the U18s last term.

Okuwa will also look up to Etete, who was signed from Notts County in the summer plays for a stint with Spurs’ U18s, while Oluwayemi was the first choice goalkeeper for the U18s last term and has now stepped up to U23 level with the London-based club.