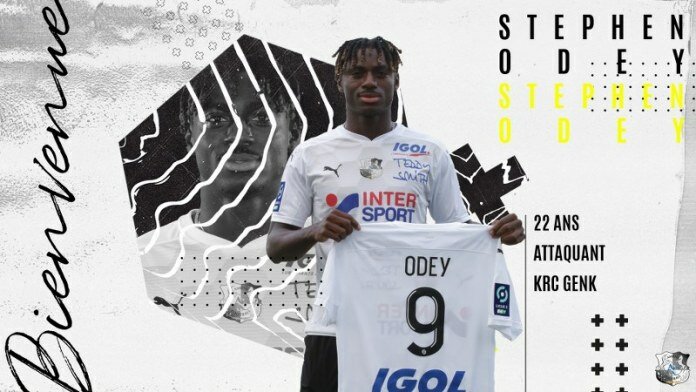 Racing Genk of Belgium will be without two of their four Nigerian plays this season, as the Jupiler League side have loaned Stephen Odey to Randers of Denmark and Cyriel Dessers goes to Feyenoord of Holland.

Megasportsarena.com reports that both strikers have dropped further down the perking order of attackers at Genk, following the arrival of Ike Ugbo from Chelsea of England, and they have now opted for greener pastures elsewhere.

Odey, who twinkled with FC Zurich of Switzerland before joining Genk leaves after tumbling into a storm several months back, while Dessers will try to replicate the form that saw him top-score two seasons ago in the Dutch Eredivisie with Heracles Almelo.

They both made their latest moves on transfer deadline day, as Genk agreed to loan out both Nigerian strikers and Feyenoord immediately announced through their official website that they have reinforced their attacking options by securing the services of Dessers for the season.

He joined Genk on a five-year deal in June 2019, but failed to establish himself in Hannes Wolf’s side and lined out last season in the French lower division with Amiens.

He scored just twice in 13 appearances for across competitions for The Blue-White in the 2019/20 season, but did not fare any better with The Unicorns in the French Ligue 2.

Feyenoord can move for a full transfer for Dessers, as they agreed a purchase option as well for the attacker, who made his Super Eagles debut against Tunisia last year and scored five goals for Genk last season.

A report by allnigeriasoccer.com added: “Dessers has decided to join Feyenoord in search of regular game time having slipped down the pecking order of strikers at Genk following the capture of Ike Ugbo from Chelsea.

“The 26-year-old is not new to Dutch football as he previously wore the jerseys of NAC Breda, FC Utrecht and Heracles Almelo, contributing a combined 66 goals and 26 assists in 125 matches across all competitions.

“Former Mountain of Fire star Stephen Odey has joined Randers on loan until the end of the 2021-2022 campaign, informs the Danish Superliga side on their official website. Randers have included a purchase option into the deal bringing Odey to the club.

“For the rest of the season, the 23-year-old will play with the number 90 jersey at Randers and is in contention to represent The Horses in the group stage of the Europa Conference League.”

The 23-year-old Odey, who previously played on loan at Amiens of France, said he was delighted with the season-long deal that includes an option-to-buy at the end of the season.

Odey declared: “It is an incredibly exciting development that Randers FC is working on, and I look forward to helping the team in a close and exciting match program.

“I have only heard good things about the club and I hope I can quickly contribute goals and assists so we can make the fans even more proud of the team.”

The club’s sports and commercial director, Søren Pedersen added: “We have been looking for a striker with speed and have for a while been in dialogue with Genk about Stephen.

“(He) is an exciting player who is fast, good in the man-man game and is also a skilled finisher, which he has shown in both Swiss and French football.

“We are happy that we have managed to get him to Randers, and that we can now drive him into the squad and get him in action after the international break.”