Leone Stars head coach John Keister has released his squad list for the Africa Cup of Nations first leg match against Nigeria and Megasportarena.com can confirm that majority of the players comprise those who featured in the team’s recent friendly matches in Turkey.

Stephen Caulker, a former former Liverpool defender who now played for Turkish club Gaziantep, is part of the 25-man squad for the qualifiers. 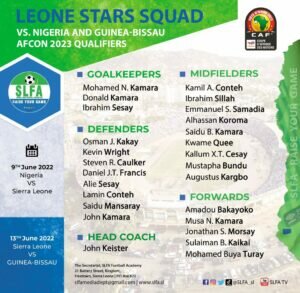 Sierra Leone open their Afcon 2023 campaign with an away contest against the three-time African Champions in Abuja on June 9 at the  Moshood Abiola Stadium in Abuja.

The last meeting between both countries ended in an unbelievable 4-4 draw at the Samuel Ogbemudia Stadium, Benin City, on November 2020. The Leone Stars came from 4 goals down to level up.

Meanwhile, Cambuur winger Issa Kallon has confirmed his withdrawal from the match due to an expected summer move.

“I am going to make a move this summer, a few clubs are interested in me, and It is important to stay fit and avoid any possibility of getting injured.

“My agent decided for me not to leave until I secure a deal. So I called and told the coach that I would not be available as this is going to be an important move to me.”

Kallon, who scored in Cambuur’s 3-2 away win against Groningen last Sunday, was in the Leone Stars March training camp in Turkey.