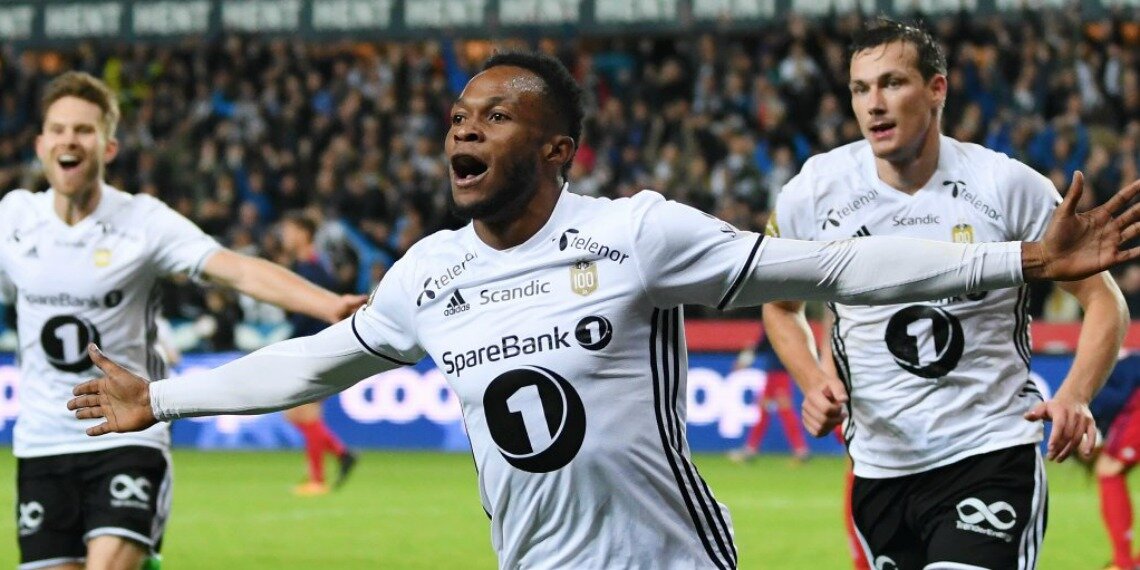 The Sweden-based of Samuel Adegbenro and Godwin Aguda led an array of unheralded Nigerian players in a rain of goals at the weekend, while Kingsley Madu and Philip Azango also hit target in Slovakia, megasportsarena.com reports.

Also on song were Manchester City of England youth team players, Sam Edozie and Tai Sodje, as a roll call of Nigerian-born players added to the scorers’ chart across Europe, on a weekend goals dried up for Taoiwo Awniyi in Germany, where he stars for 1.FC Union Berlin.

In Sweden, Adegbenro is still top scorer in Sweden’s top-flight league, as he netted his 10th goal of the campaign with a late equaliser away to FF Malmo, who were running away with victory before he rose above the opposing defence to head home a free kick for Norrkoping.

The dramatic equaliser came five minutes into added time, with Adegbeno staring alongside young Nigerian compatriot, Ishaq Abdulrazak, who played the entire game for Norrkoping, while Innocent Bonke started for Malmo, but was replaced after just 23 minutes.

While Bonke appeared to have bowed under fitness pressure, few days after returning from international action with the Super Eagles in Cape Verde, where he got his debut for Nigeria, 25-year-od Adegbenro continued his career-revival, after a torrid spell at Rosenborg of Norway.

With loss of form, stiff competition and a long-term injury putting him into a storm during his time in Norway, Adegbenro sought a move from Rosenborg to Turkey, but that effort collapsed over personal terms, until the deal in Sweden popped out of the blue for him.

Also in Sweden at the weekend, Aguda enjoyed a goal-scoring debut for Falkenbergs FF, as the 23-year-old former Rivers United of Port Harcourt and Rangers International of Enugu forward hit target eight minutes from time.

Aguda was able to pull back a goal for his team away to Jonkopings Sondra IF after getting off the bench in the second half, but the home team still won the game 2-1, while Peter Nsima, also featured for Falkenbergs and was booked few minutes to full time.

Sadly, Agude and Nsima have not been able to translate their brilliant individual performances into collective strides with their team, as the club lie 15th on the 16-team table with 19 points from 20 matches in the Swedish Superettan.

In England, Sodje and Edozie were the heroes for Manchester City’s second team in their victory over Chelsea in the English Premier League 2, as they pulled of the biggest impact with stunning goals that helped The Citizens stay top of the standings with ten points.

Their latest cruise was a 4-1 rout of Chelsea at Academy Stadium on Saturday afternoon, with the nephew of former Super Eagles’ defenders, Efe and Sam Sodje, winning a penalty and then got a brace, while Flying Eagles hopeful and England youth team player, Edozie also hit target

Bryan Fiabema and Tariq Uwakwe went the distance for Chelsea, who went ahead after Harvey Vale slotted home from close range on nine minutes, but Man City were level midway through the first half when Sodje tapped in after a free-kick from Palmer.

James McAtee scored a penalty awarded in the 78th minute after Sodje was brought down in the box to make it 2-1 and Edozie scored Man City’s third goal three minutes into stoppage time.

Sodje wrapped up the scoring with almost the last kick of the game in the 96th minute, thereby taking his tally for the season to three goal in the Premier League 2, after opening his account in the last game before the international break, against Manchester United.

In Slovakia, Madu and Azango scored for AS Trencin, while Aliyu Zubairu added two assists in their 3-1 win away to SK Zilina.

Madu opened scoring for the away team after just seven minutes, with an assist by Zubairu, as the three Nigerians combined to take Trencin up to fourth in the standings with 12 points from seven games, just a spot below Zilina.