Rohr Disowns Decision To Appoint Yobo, Dikko Says No Cause For Alarm 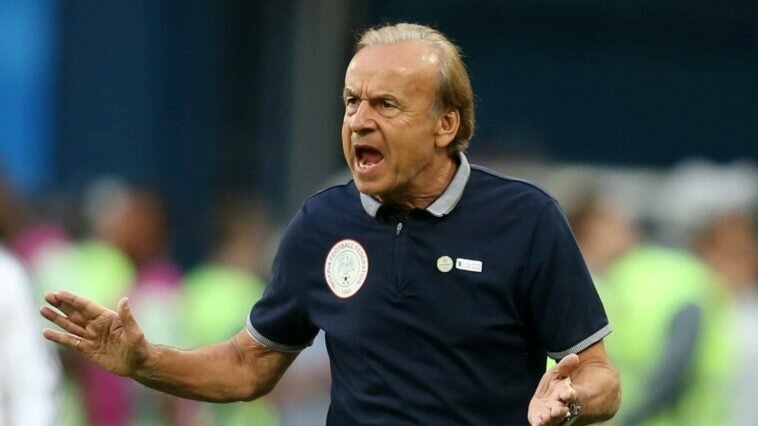 The announcement of former Super Eagles’ captain, Joseph Ikpo Yobo as new assistant coach in the Nigerian national team has apparently caught the head tactician, Gernot Rohr unawares, as the Franco-German gaffer says he was not consulted before the decision was reached, megasportsarena.com reports.

In what appears like a veiled condemnation of the action by Nigeria Football Federation (NFF) on Wednesday, Rohr not only denied knowledge of the decision, he also went on to question the credentials of Yobo, who many observers says does not have a coaching license.

The unfolding drama has left many Nigerian football followers looking at it as a coy move by the NFF to force Rohr out and get Yobo to step in, but the soccer governing body’s second vice-president, Mallam Shehu Dikko parried such suggestions.

In contrast with suggestions that Rohr is stylishly being forced out by officials at The Glasshouse, Dikko revealed that the football governing body has already started negotiations with the coach over terms of a contract extension that would keep him in the Eagles’ saddle until 2022.

With Rohr’s current contract set to run out this June, speculation has been on that the NFF aim to ease him out with stifling conditions in a new proposed contract, with the appointment of Yobo now seen as the final nail in the coffin, but Dikko insists that the Franco-German gaffer will remain in charge of the Eagles, and urged anxious Nigerians to allow the issue pan out.

Dikko added: “The last time when the extension was given people didn’t know it was being discussed. People should just allow the employer and the employee to deal with their issues. As far as I know Gernot Rohr is preparing for his next contract with Nigeria, June or July. Everybody is doing what they have to do and I don’t think there is any problem about that.

“The technical committee, legal people involved are dealing with it, so people should not put pressure on anybody, either Gernot Rohr or the NFF. They will do what they have to do at the appropriate time. He’s the coach of the Super Eagles as far as I know.”

This comes few hours after owngoalnigeria.com quoted Rohr as telling internationally acclaimed Nigerian sports journalist, Osasu Obayiuwana that, although the NFF told him about their move to appoint Yobo before it was made public, it was not his decision to employ the former player.

Owngoalnigeria added in their report that Rohr said: “The Nigeria Football Federation has the right to pick one assistant coach for my staff, so they are the ones to communicate the reasons for his appointment not myself. I was informed by Amaju Pinnick in a telephone call before it was made public.

“I don’t know why Imama has been removed. I worked very well with him. He did a very good job with me. I regret his departure. But since the NFF have the right to take this decision, there is nothing that I can do about it.

“I have the responsibility to develop coaches from Nigeria as agreed with the NFF. I am more than happy to do that. Yobo is welcome to the team of course. I have heard that he has no coaching diplomas, so I will talk to him about this if what I have heard is correct, I will tell Yobo that he needs to do the training required to grow as a coach.”