Reims have announced the signing of Arsenal striker Folarin Balogun on loan until the end of the upcoming campaign, in a deal that does not include a permanent clause, Megasportsarena.com.

The Champagne side had been looking to bring in two forwards this summer in the wake of Hugo Ekitike’s departure for Paris Saint-Germain, with Scottish forward Fraser Hornby also leaving on loan to join KV Oostende this season. 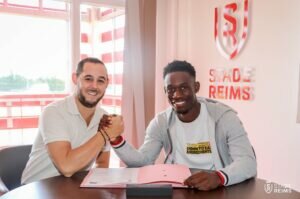 Balogun was among a shortlist which also included Polish forward Aleksander Buksa of Genoa as well as Japanese winger Junya Ito of Genk – in the end, the club have brought in the England youth international as well as Ito.

The striker has another three years left on his contract with the Gunners, and now leaves to gain more experience having played ten times so far for the club, scoring twice in their Europa League campaign in 2020/21.

He spent the second half of last season out on loan at Middlesbrough, with the Championship side finishing just outside the playoffs in seventh place while he scored three goals.