Omeruo Admits Struggles At Chelsea, He Supported Utd While Growing Up 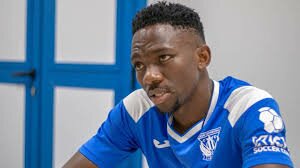 CD Leganes of Spain defender, Kenneth Omeruo has come with a down-to-earth confession that he actually struggled to make the cut during his days with Chelsea of England, but comforted himself that it was actually their English Premier League rivals, Manchester United he would have preferred to join.

Megasportsarena.com recounts that Omeruo never got to play a single competitive match in almost six years of three contracts at Stamford Bridge, as he kept on being loaned out, yet he recalls how much effort he gave each time he had opportunities of training with the senior squad.

He noted that he had been determined all along even before moving to Europe wthatt he would never take any opportunity with levity, hence the battles he normally fought with the like of John Terry anytime he was called up to train with the main squad.

However, after loans spells with ADO Den Haag of Holland, Middlesbrough of England as well as the Turkish duo of Kasimpasa and Kayserispor, Omeruo was able to make the best of a similar deal at Leganes and turn it around into a full contract, which he is now enjoying for the second season running.

Dramatically, though, the former Sunshine Stars of Akure and Standard Liege of Belgium dark-skinned stopper, who shot to limelight in the silver-winning Golden Eaglets’ squad at Nigeria 2009 FIFA U-17 World Cup, said it could have been memories of Old Trafford for him, as he had been a Man United supporter as a kid.

Nonetheless, he still has fond memories of his days at Chelsea, which he joined in January 2012, recalling that he once roughly tackled Terry, but the former longest serving player on The Blues’ contract list, before joining Leganes on a permanent deal last summer, further disclosed that the London-based side’s ex-captain remains his sfavourite defender of all time.

Omeruo told Eagles Tracker: “I was supporting Manchester United growing up. After I got signed by Chelsea, everything was Chelsea, up till now it is still Chelsea. It was great signing for Chelsea because it came as a surprise, I never believed it could happen but at the end of the day it happened, I was so happy.

“Unfortunately, I had to go on loan because of work permit so I went to ADO Den Haag where I got playing time until I was called back by Chelsea. If you are a young center back, you have to be aggressive because you have to stand out. If you have to leave the shores of Nigeria, you have to have the quality, know how to win the ball and not losing it; make sure it gets to your partner.

“There was a situation where I chopped (John Terry) and he was swearing at me, it was so funny later. I didn’t care what he was saying, I wanted to play for Chelsea so I wasn’t concerned but he’s a great guy. He is my favourite defender of all time. ”