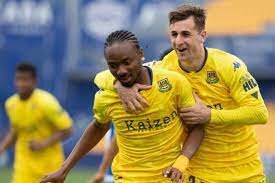 UD Alcorcón of Spain midfielder, Kelechi Nwakali continued his amazing burst of form with another goal in the Spanish lower division, while Moses Simon provided an assist in the French Ligue 1, but Semi Ajayi gave away a penalty in England, megasportsarena.com reports.

While Simon returned to the spotlight with FC Nantes of France, Ajayi was a major culprit in another defeat for relegation haunted West Bromwich Albion of England and Nwakali’s goal could not save his side from defeat, as they fell 2-1 to Leganes in a LaLiga 2 clash at Estadio Santo Domingo.

Leganes defender, Kenneth Omeruo was absent from the mach on Sunday, as he was serving a ban for a red card he got the previous weekend, thereby leaving Nwakali as the lone Nigerian to watch and he made his mark by netting a penalty kick that put Alcorcón ahead in the ninth minute.

It was the third consecutive game in which the former Arsenal of England midfielder would score, following his earlier goals against CD Castellón and CD Lugo, with two coming from the spot and the third via a direct free-kick.

Nwakali, who is on loan from top-flight side, SD Huesca has 13 starts since his joining Alcorcón in the winter transfer market, but his latest goal could not save his side from losing, as Shibasaki restored parity for Leganes in the 44th minute and José Arnáiz scored the winning goal on the hour.

In England, Ajayi was a major culprit, as West Brom saw a winning opportunity slip away in the second minute of stoppage time and they eventually had to settle for a 2-2 draw away to Aston Villa on Sunday evening.

Ajayi made his first start in three consecutive games for The Baggies and went the distance, but he could not save their blushes when Keinan Davis pounced on a defensive error to equalise right at the death for Villa, who almost went on to win the game.

The Baggies initially stormed from behind to take the lead through a Tyrone Mings own goal in the 47th minute after Anwar El-Ghazi gave Villa the lead from the spot early in the game and the spot was again from where Matheus Pereira leveled things up midway through the first half.

Konsa was deemed to have clipped Maitland-Niles, long after Ajayi was adjudged to have fouled Villa’s Nigerian-born midfielder, Ross Barkley in the box as early as the ninth minute and a penalty was awarded by VAR.

In France, Simon provided an assist while Jean-Charles Castelletto scored as Nantes secured a 2-1 victory over Strasbourg in Sunday’s Ligue 1 game, as Antoine Kombouare’s team put up a better performance than their recent defeats in their last three matches against OGC Nice, Stade Rennes and Olympique Lyon.

Sunday, though, provided a better outing, as Simon was in top form and helped The Canaries get back to winning ways at Stade de la Meinau, where Nantes aimed for an early goal and made several attempts to open the scoring but missed all chances that came their way.

The former SK Trencin of Slovakia, KAA Gent of Belgium and Levante of Spain winger, who featured for 80 minutes before he was replaced by Marcus Regis Coco, then set up Ludovic Blas and he fired home his effort for the match-winning goal 14 minutes before the end.

Simon, who has scored five goals and provided two assists in 29 league appearances this season, earlier delivered a fine cross in the seventh minute of the encounter but his teammates failed to connect the opening and Nantes remain in the relegation zone with 31 points from 34 games.

In Russia, Spartak Moscow winger, Victor Moses and his teammates did their title ambition a lot of good with a 1-0 victory over local rivals, CSKA Moscow, who featured Chidera Ejuke, but both Nigerians did not get among the goals, as Jordan Larsson’s second-half strike decided the derby.

Both teams went into this crunch encounter at Otkritie Arena on the back of losses in their last fixtures, but victory for Moses’ side means The People’s Team now stand a stronger chance of winning a 23rd Russian Premier League diadem.

That target got a boost with their latest result against The Horses, as Moses et al held on to the lead and with no goals in the remainder of the game, they secured all points at stake, with the lad on loan from Chelsea of England playing from start to finish, but he was cautioned in the 90th minute for time-wasting.

On the other side, Ejuke was replaced by 21-year-old Belarus youth international Ilya Shkurin in the 82nd minute, in a game that helped Spartak remain third on the log with 50 points from 27 outings, while CSKA sit in sixth spot with 46 points from the same number of games.