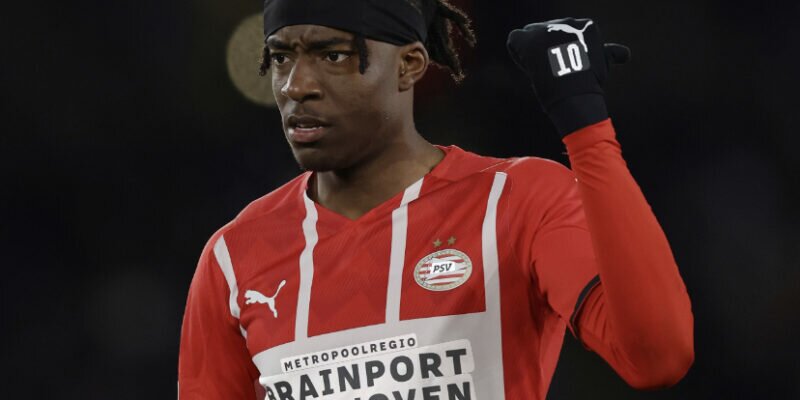 LNoni Madueke is one of ten Premier League players on the 100-man list for the Golden Boy award, Megasportsarena.com reports

Madueke, the former Tottenham wonderkid, 20, was in outstanding form last season with one of his highlights being how he blew away Ajax in the Johan Cruyff Shield final back in August with two stunning strikes in PSV’s sensational 4-0 win.

Madueke could have stayed on in England – with Spurs offering him a new deal, as well as reported offers on the table from the Red Devils and Chelsea. But the brave winger opted for a move abroad, and there’s been no looking back since as he’s taken the Eredivisie by storm.

From the offset Madueke was a hit. He scored his first goal for PSV in only his second start for the club against FC Emmen last season.

That followed an impressive performance against Groningen, when he came off the bench to create two goals in a 3-1 win and really announced himself.

In his debut campaign he managed nine goals in all competitions in just 32 games, and he has repeated those numbers so far this season/

Recently, the likes of Bayern Munich and Liverpool have been credited with an interest in the youngster, who wouldn’t have done his chances of a big move any harm with his masterclass against Ajax.

The winner will be decided by a mix of votes on the website of organisers Tuttosport and a range of European journalists.