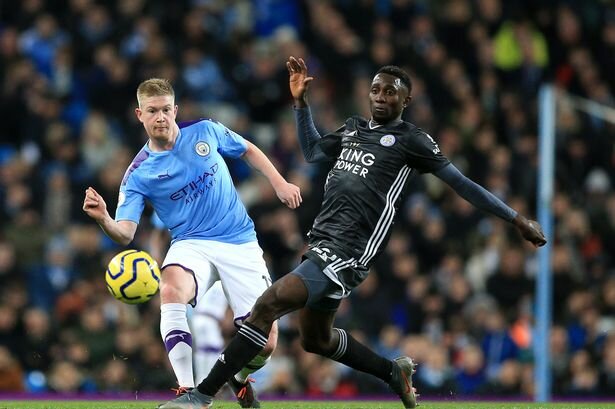 Leicester City of England midfielder, Wilfred Onyinyen Ndidi is lamenting over what could have been an assist for him was denied in Saturday’s home defeat by Manchester City in the English Premier League, when what looked like a goal by Jamie Vardy was overruled by the referee.

It so happened three minutes after the restart, as Ndidi thought he bagged his first assist of the season when he slotted a ball through to Vardy, who rounded City’s goalkeeper and nipped into an empty net but the goal was disallowed after a VAR review.

Megasportsarena.com reports that Ndidi, however, went the full ninety minutes with The Foxes, who had Kelechi Iheanacho on as a 73rd minute substitute, same minute new signing, Ademola Lookman replaced Harvey Barnes for his Leicester debut.

Elsewhere, Peter Oghenekaro Etebo, William Troost-Ekong and Emmanuel Dennis Bonaventure all started for Watford, but they could not save their team from losing 2-0 at home against fiery Wolverhampton Wanderers.

Few hours after Bonaventure was named the club’s player of the month, Saturday’s setback at Vicarage Road was their third successive loss this season in the EPL, after Francisco Sierralta’s own goal and Hee-Chan Hwang’s strike earned Wolves their first win of the season.

Etebo got a yellow card in the 13th minute and was substituted in the 77th minute, Bonaventure was also booked in the 69th minute, while Frank Onyeka also got back into EPL action in the 65th minute of play for Brentford against Brighton & Hove Albion.

Brighton’s Leandro Trossard netted a 90th minute winner to earn The Seagulls all three points against The Bees at Brentford Community Stadium, where Onyeka played the last 15 minutes for the hosts, following his recovery from COVID-19.

On the same evening in the EPL, Michael Olise played the last three minutes on his debut for Crystal Palace, who won their London derby with Tottenham Hotspur 3-0 at Selhurst Park, where former Celtic of Scotland striker, Odsonne Edouard scored twice after getting off the bench in the closing minutes.

Wilfried Zaha gave The Eagles the lead on 76 minutes, but Tottenham’s Nigerian-born 21-year-old center back, Tobi Omole, who recently signed from Arsenal, remained rooted to the bench in the lunchtime kickoff.

At St. Mary’s Stadium, it finished goalless between Southampton and West Ham United, with Nathan Tella rooted to The Saints’ bench all evening lng, while Arsenal’s season was finally ignited by Pierre-Emerick Aubameyang’s close range effort.

That earned Mikel Arteta’s team a 1-0 victory over Norwich City at Emirates Stadium, while Bukayo Saka was on for the duration with the home team, but Adam Idah got off the visitors’ bench to replace Lukas Rupp in the 80th minute.