Omoruyi In Dilemma Over Making Choice Between Nigeria Or Spain 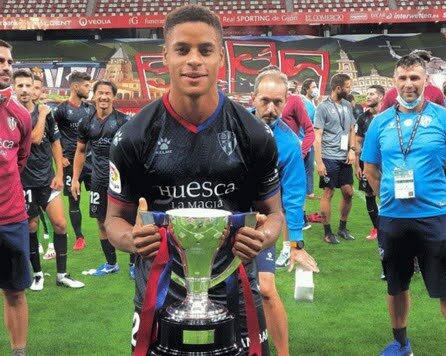 SD Huesca of Spain striker, Carlos Kevin Omoruyi has become the latest Nigerian-born player at the centre of a national team tussle, as he is contemplating on either continuing into senior level football with the country of his birth or switching allegiance to play for the Super Eagles, megasportsarena.com gathered.

So soon after Omoruyi emerged alongside former Golden Eaglets’ captain, Kelechi Nwakali in the historic squad of Huesca that gained promotion back to the top-flight Spanish LaLiga last weekend, latest reports swirling round him are about the dilemma he is facing in making a bold choice between Nigeria and Spain for his international future.

Born January 2001, Omoruyi is eligible to represent Spain where he was born and equally has an allegiance for Nigeria through his father, but while he was initially not talked about by either country, his status is bound to change in the coming months, as he has edged closer to Huesca’s main team and could subsequently get opportunities of playing in LaLiga next season.

A report by allnigeriasoccer.com noted that Huesca’s coach, Michel has cited Omoruyi as one of the talented youngsters currently in the newly-promoted club’s youth ranks, hence his decision of inviting the lad to train with the first team during pre-season last summer.

Omoruyi was also an unused substitute for Huesca’s final two fixtures of the season – against Numancia and Sporting Gijon – as confirmation of how he is highly rated by the club that signed Nwakali in a full contract last summer.

Nwakali will also hope to finally get his breakthrough in the senior ranks, after he failed to shine at FC Porto of Portugal last season, in his last stop on loan from Arsenal of England, which he joined after captaining Nigeria to win the 2015 FIFA U-17 World Cup in Chile.

Although Omoruyi revealed that he is yet to discuss his international future with Nwakali, he could easily make up his mind to play for Nigeria because one of his role models as a striker was former Eagles’ hitman, Daniel ‘The Bull’ Amokachi, who he has styled his pattern of play after the ex-international’s renowned all-action style.

“At the moment I have not discussed it with Kelechi yet. I was born in Spain but my parents are from Nigeria. l have been to Nigeria, it is a very beautiful country and you enjoy a lot. Of course I would be very happy to play for any Nigerian team.

“I have always played as a striker and I model my game after Daniel Amokachi. I am working very hard and I have the confidence that I will make my debut in La Liga next season,” Omoruyi concluded.