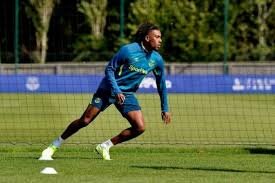 Everton of England midfielder, Alex Iwobi is heading for a higher spot in the roll call of Nigerian players with most number of minutes from overall playing time during matches in the English Premier League, should he feature in Sunday’s game versus his former club, Arsenal, megasportsarena.com gathered.

In a dramatic scenario of many talking points, Iwobi heads into the cracker at Goodson Park on the backdrop of how he suffered a serious injury after only 11 minutes of the first round clash in December, but he is no back to full fitness and angling for the opportunity to finally prove The Gunners wrong for selling him to The Toffees last summer.

Playing Sunday’s game would also help Iwobi surpass former Newcastle United striker, Shola Ameobi as the ninth ranked Nigerian player with the most minutes played in the EPL, if he is named in the starting line-up against Arsenal on Sunday evening.

Iwobi, who has logged 7,019 minutes since his debut for Arsenal three years ago, will most likely on Sunday jump over Ameobi into ninth spot on the log, but he will still be behind Victor Anichebe, Peter Osaze Odemwingie and Dickson Paul Etuhu.

Ameobi, who is Nigeria’s record of overall match appearance holder in the EPL, pooled 7,050 minutes in 298 matches for Newcastle and Crystal Palace while Iwobi garnered 5,910 minutes at Arsenal and already has 1,109 minutes with Everton since his summer arrival at Goodison Park.