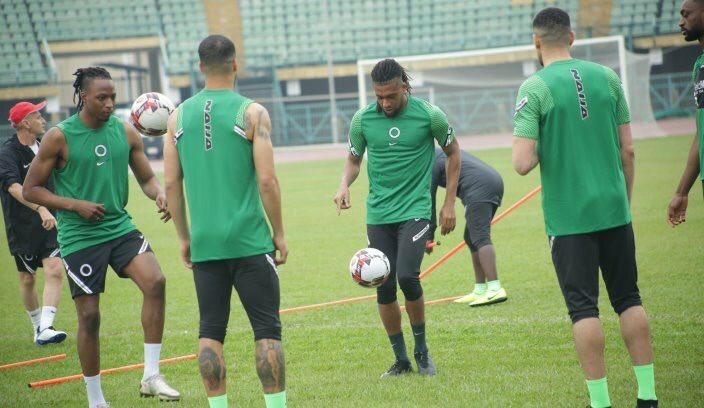 The England-based trio of Alex Iwobi from Everton, Kelechi Iheanacho of Leicester City and Watford’s Oghenekaro Etebo all arrived at the Super Eagles’ camp in Lagos, in defiance of coronavirus alert declared by the government of Great Britain.

This is in contrast with initial fears that six players invited from England as well as the Glasgow Rangers of Scotland duo, Joe Aribo and Leon Aderemi Balogun, would not be able to honour Nigeria’s invitation, but Germany-based Kevin Akpoguma is out due to COVID-19 infection.

Rather than use the UK government’s declaration as an excuse to stay away, Iwobi, Etebo and Iheanacho were among the earliest arrivals, as the Eagles’ camp came alive on Monday, with 11 players already around ahead of the 2022 World Cup qualifiers against Liberia and Cape Verde.

That marked a vibrant start to camping by the three-time African champions, who are scheduled to play Liberia’s Lone Stars at Teslim Balogun Stadium, Lagos this Friday, then face Cape Verde’s Blue Sharks four days later at Estádio Municipal Adérito Sena in Mindelo.

However, megasportsarena.com further gathered that Eagles’ coach, Gernot Rohr will not be able to field Akpoguma for any of those matches, as the TSG Hoffenheim of Germany defender has reportedly tested positive for Coronavirus.

The 26-year-old former Fortuna Dusseldorf of Germany defender, who got his debut for Nigeria in a 1-0 friendly loss to Algeria in October 2020 and has made four appearances for the Eagles, becomes second player to be ruled out of the game due to Covid-19.

Brentford of England new signing, Frank Onyeka was earlier forced to withdraw from the squad and has since been replaced by Abia Warriors of Umuahia defender, Adekunle Adeleke, who was among the earliest arrivals in camp on Monday.

Akpoguma’s absence has been confirmed by his club, as TSG lamented that the former Germany youth international, who has scored one goal and recorded an assist in three appearances for ‘The Village Club’ so far this season, will not get the opportunity of adding to his Eagles’ caps.

“He will not join up with the @NGSuperEagles squad and will instead quarantine at home. Kevin is displaying no symptoms and is well.

“Furthermore, all present players and members of the coaching and support staff were tested. All test results came back negative.”